The main attraction of Carnarvon National Park was, as been recommended by many, Carnarvon Gorge. Our camp for the three nights and two days was Sandstone Park – a bush style campground situated on top of a low plateau about 6 km from the car parks for the main Carnarvon Gorge walk.

The daytime weather at Carnarvon had warmed up to just over 20 degrees both days, but the nights were still very cold. Also being on top of a plateau without too many trees, it caught any wind going. Although it was generally quite calm, every now and then a strong blast would suddenly hit us and then, equally suddenly, disappear. The campground was unusual as it had portaloos as toilets and we were concerned they would run out of water, considering the camp was fully occupied, fortunately that didn’t transpire.

The view to the east from our kitchen was across the plain below and to the west to the escarpment of the National Park, giving us spectacular views of the sunrise and sunset.

The full length of the main walking track (grade 3/4) is almost 20km return and estimated to take 7 – 8 hours. However, there are various milestones and detours along the way which means that hikers can tailor their walk to suit their timing and/or capability. There are also a couple of other shorter walks that start at different locations.

We elected to tackle our big walk and the first day and the shorter ones on the second day.

Arriving at the information centre to start the walk, we had our first surprise – it was un-manned and there was no souvenir shop. Anyway, we set off at about 09:30, having decided to aim for as far as the fourth detour, take each of the others on the way to then return directly.

One of the features of the track are the river crossings, six in total which we had to cross twice, of course. Due to the recent rain, the creek was flowing a bit higher than normal and, as a result some of the stepping stones were overflowing and generally making one or two of them quite tricky. Walking poles were essential at helping to keep our balance and I am pleased to say, that we manged without getting our feet wet (thanks also to waterproof hiking boots).

The first detour was to the Moss Garden, a short climb off the main track to an area at the end of one of the creeks that feed into the main Carnarvon Creek. The end of this part of the walk was a platform from which we were able to see the moss covered rock faces dripping with water. This is a constant phenomenon arising from water seeping through the various layers of porous rock above, hitting an impervious layer and taking the only way out – down the rock face. Of course, moss thrives in such a damp environment, this creating a very unusual micro-climate. 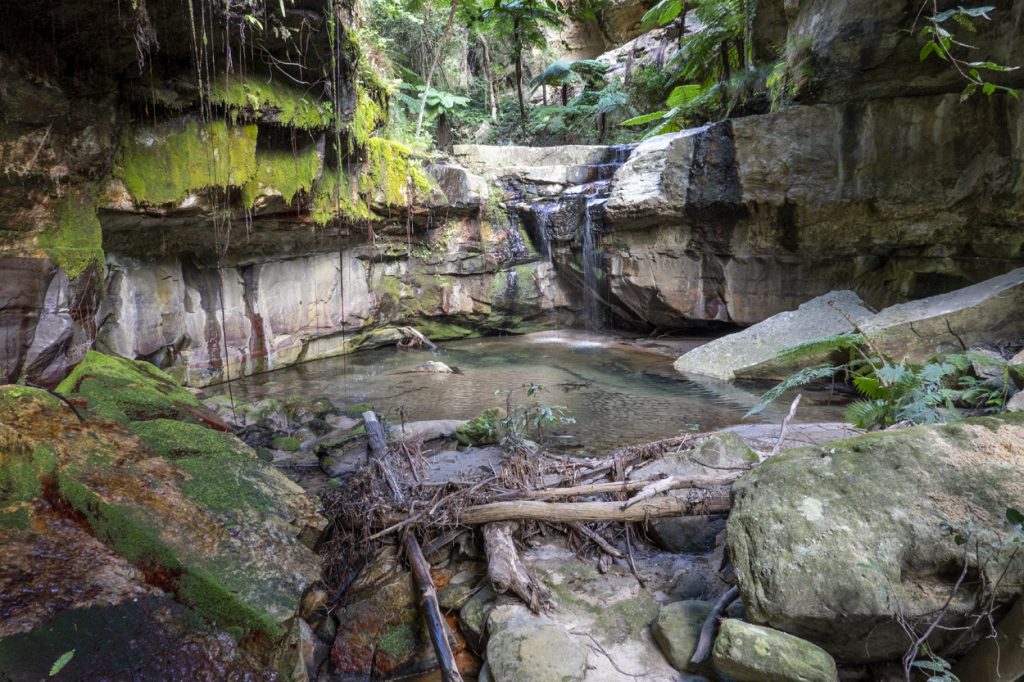 Following the creek further into the gorge, the next detour was to the Amphitheatre. This track rose up through a wide gorge to what looks like the end of the trail. However, on looking closer, there is a set of steps that lead to a vertical crack in the rock face. At the top of these steps is a narrow passageway that leads through to a very impressive open air chamber that they call the amphitheatre (for want of a better description it is a deep almost circular shaft).

This is a very sacred and spiritual place for the local indigenous people and, being there, it certainly felt that way. It would have been great to stay there and soak in the atmosphere, but two other groups of hikers had followed us in and making a bit of noise – time to leave! 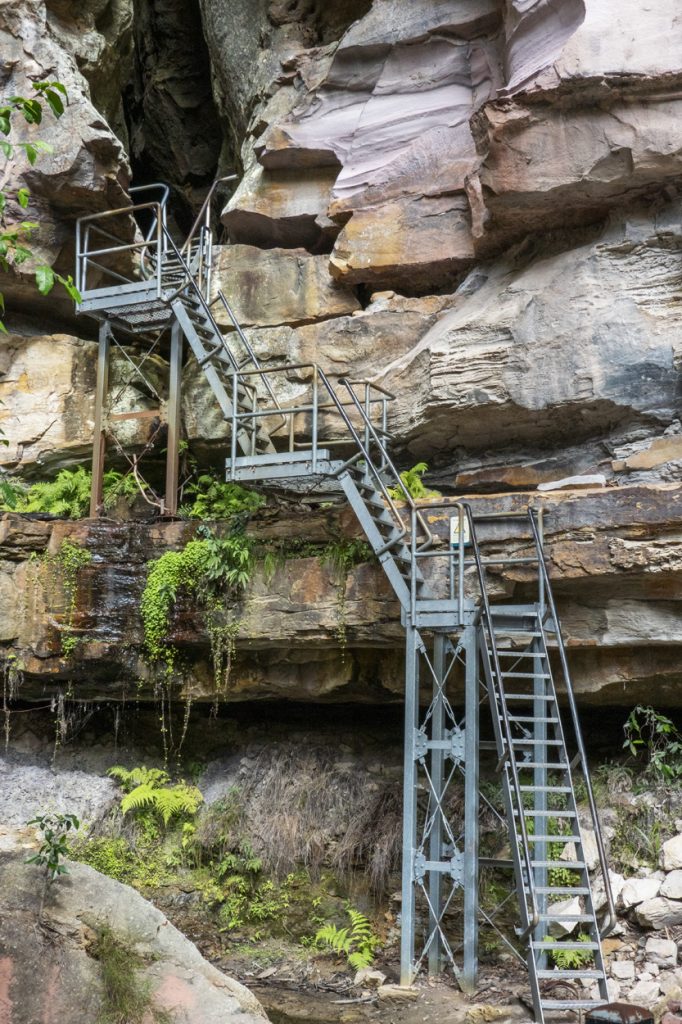 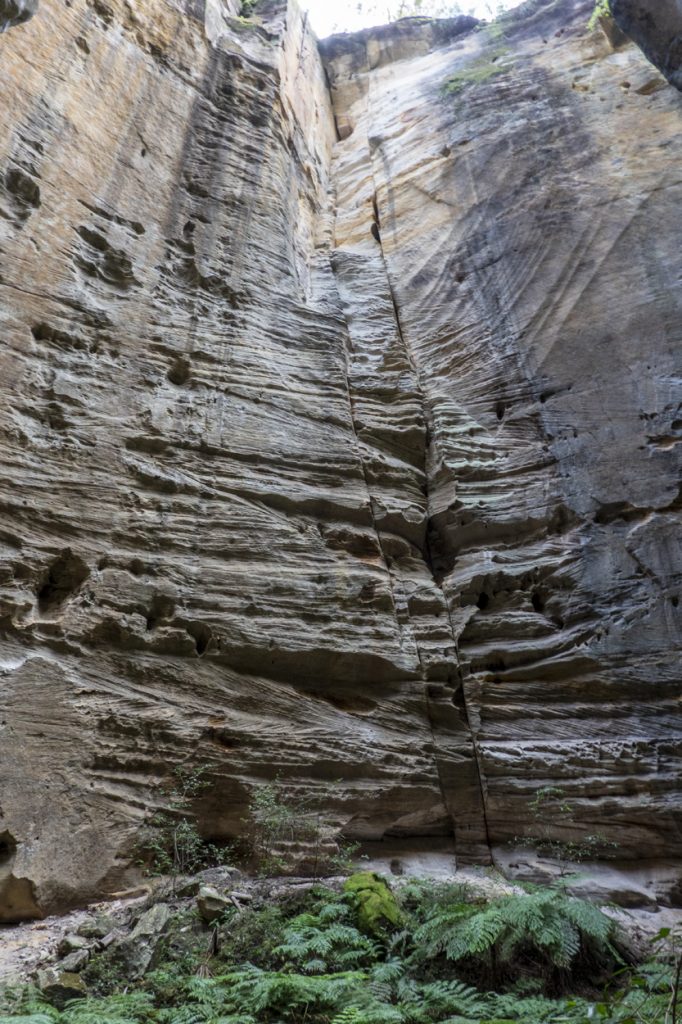 Back on the main track, we decided miss out Boolimba Bluff and continue on to our final destination, the art gallery. This is a rock face covered with aboriginal art work created from mouth blown pigments. A boardwalk forms the gallery viewing area and seating area, where visitors can sit to admire the art.

Back on the main track, we managed our return journey in a much shorter time, the total distance was 15 km and it took us about 5 hours.

On the next day we completed three short walks, commencing with the 1.5 km nature walk. As we were hoping top see a few different bird species and perhaps a platypus, we set off early and started the walk at 08:00 and eventually not finishing until 90 minutes later!

We were treated to a couple of platypus making their way up the river, moving from bank to bank, so we watched them for a while and took quite a few photographs – this being the first time we had seen them in a totally natural setting.

Amongst a few different species, K managed to find a Kingfisher to photograph – it was quite obliging in regards to where it perched and for how long. 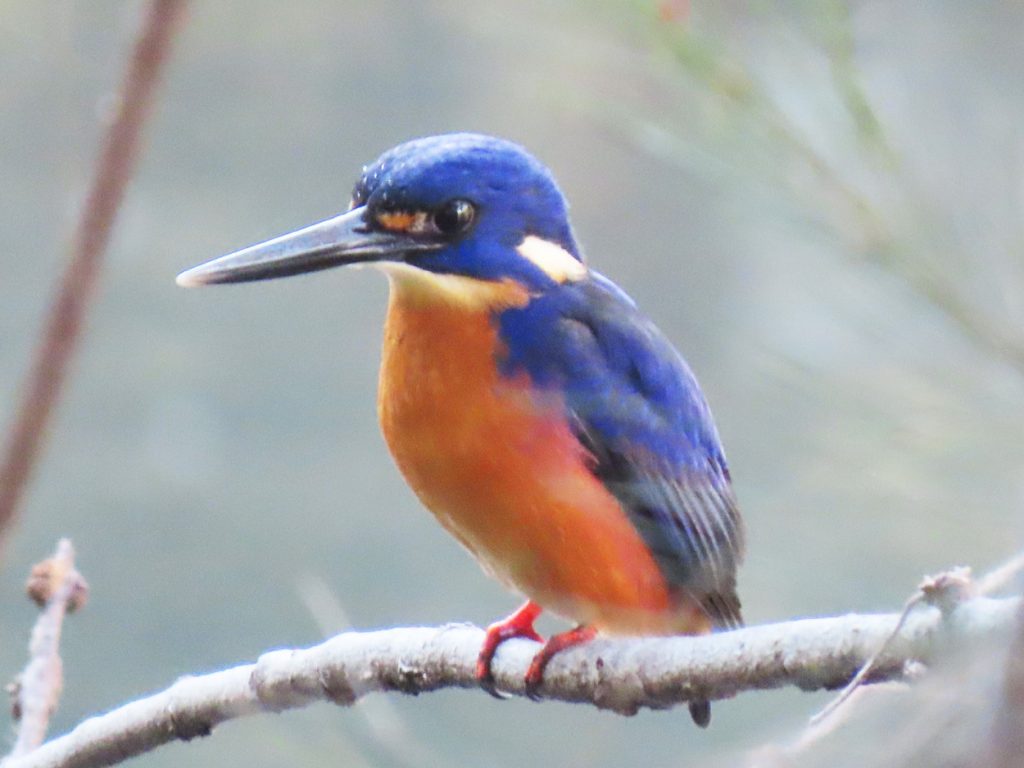 The walk itself was very pleasant and not at all taxing – a great start to the day!

After a short drive we relocated the car to the Mickey Creek trailhead to tackle the 3 km return walk up the gorge. We were told that after the formed track finished, we could take a rough track further up, which, of course, we did. This took us in a return direction until it ran out. At this point we could see the branch to Warrumbah Gorge, the entranced to which we had passed on the way up, so we bush bashed down to that and carried on up this gorge.

Although Mickey Creek was interesting, this gorge was a real surprise and much more interesting. At the end of the formed track, we were able to continue up the gorge as it got narrower and narrower, to the point where we could touch both sides very easily. However, the going got a lot tougher and, although a (much) younger couple continued, we decided to turn back.

It was strange that this more interesting branch did not figure in any of the walk descriptions. On return to the car, it was morning tea time, but we drove back a couple of kilometres to the Rock Pool first.

After, refreshments, we took off on the very short 200m track to the Rock Pool.

Our preconception was that there would be a series of small rock pools in which we could dangle our tired feet. In actual fact, it was a single pool with a large rock in it. However, it was very picturesque, in particular the tree growing out of the indentation in the rock. We both managed to soak our feet in the icy cold water, with K lasting a lot longer than me.

We returned to the camp for lunch and started to make preparations for leaving the following day. 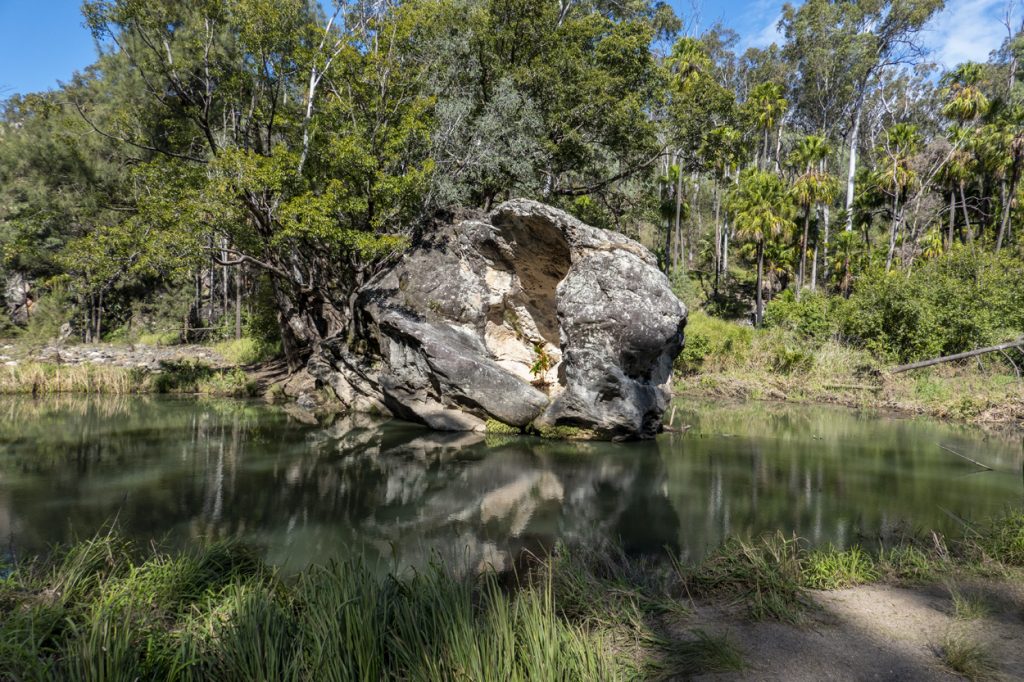 We left Carnarvon National Park on Thursday 7 July and it is now Thursday 14 July, so I have lots to catch up on. Part of the reason for being behind is the lack of internet access and, to be honest, doing stuff, rather than writing about it, as well as rescheduling and trying to book with weak internet connections. We are now camped at the racecourse at Boulia waiting for the camel racing event to start on Friday evening. I hope between now and then to be able to write and upload another post, but no promises!