In my last post, I mentioned that a substantial amount of rain was forecast, well, it essentially rained for 24 hours from Friday afternoon and there is more forecast for Monday and Tuesday. Had we not had a few bookings, we would have been much further west and away from the rain by now.

One of the main bookings is with a mechanic in Moura who will replace the trailer brake pads. I had the trailer checked over before leaving and was advised when I picked it up that the pads might need replacing before we returned – if only he had let me know during his inspection, I would have them done then to save any hassle on the road.

I also mentioned that we have had a few dramas in the past week. Without going into too much detail:

On leaving Binna Burra, we had to drive through Brisbane and, as we were trying to avoid the toll roads, the two GPS systems were giving us different directions. Not only that, it was Saturday and the traffic was particularly busy. The journey took as more than twice as long as it should have done

We needed quite a few provisions, but, on the way through Brisbane, trying to find a supermarket that has space for a car and trailer can be quite stressful. We eventually found one with an empty roof top car park and stocked up.

Our next stop after the Glass House Mountains was Rainbow Beach, so we thought we would drive up the Sunshine Coast to take in the views – big mistake as it is all built up and had nowhere to park a car and trailer close to any beach.

Arriving at the Rainbow Beach campground, I managed to bog the wagon and trailer in the sand, thanks to one of the campers we got it out.

At Rainbow Beach, faced with quite a few days of rain and no ability to charge the trailer batteries, I tried to grab a bit of sunshine with the solar panels, but they would not charge. So, we packed up on our first morning and left for Gympie and pulled into a battery place, only to discover that a fuse had tripped.

We found a campsite with mains power, camp kitchen and ‘extensive’ undercover areas in our book, so we thought we could use that to avoid cooking in the overnight rain and to charge the batteries. The extensive areas did not transpire, so it was a cold dinner on Thursday evening. We only stayed there one night and drove to Gayndah, where experienced the 24 hours of rain.

Anyway, enough of our woes! Our campsite for the four nights at Glass House Mountains was a State Park bush camp at Coochin Creek. This was a well-appointed campground close to the creek, but a short drive to the Glass House Mountains National Park. On our first day, we didn’t move the wagon, spending our time relaxing and walking along the creek. However, the next two days were spent exploring the hinterland.

In the meantime, I managed to prise myself out of bed at 3 am to photograph the milky way over the creek.

On the second day and after a substantial climb up the road, we arrived in Maleny to visit the Bird Sanctuary and Botanical Gardens where we had booked a tour round the aviaries. It was really great to get up close and personal with so many different varieties of birds – K was in her element!

After a wander through the botanical gardens, we drove through some amazing landscapes north to Yandina to visit the ginger factory where we joined the factory tour. It was really interesting to hear about the whole ginger industry process, from growing to processing and delivery.

Needless to say, we bought some yummy ginger products before leaving.

On the final day, Tuesday, our first stop was the Glass House Mountains lookout. This has spectacular views of the mountains to then north and south and the coast line to the east. Before leaving, we completed the short 1 km walk which took us about 15 minutes rather than the 45 estimated.

From there we headed for the Tibrogargan trail head and started down the 5.7 km Trachyte Circuit. After stopping for our packed lunch, this popular walk took us to the Jack Ferris lookout with stunning views across the Park and Mount Tibrogargan. On the way back, we diverted onto the track around the base of the mountain to result in a total distance walked of 6.5 km. Both of these tracks were an easy walk.

We returned to Coochin Creek to start to get organised for a next day departure.

This five-night stopover was supposed to be the ‘beach holiday’ of the trip, but it was anything but!

By the time we arrived, it was almost dark, but managed to get the awning up and settle in for our five nights. The short walk to the toilet was like walking along a deep sandy beach, but that we thought, would prepare us for our planned beach walks. The next morning those plans were dashed as you can see from this photograph: 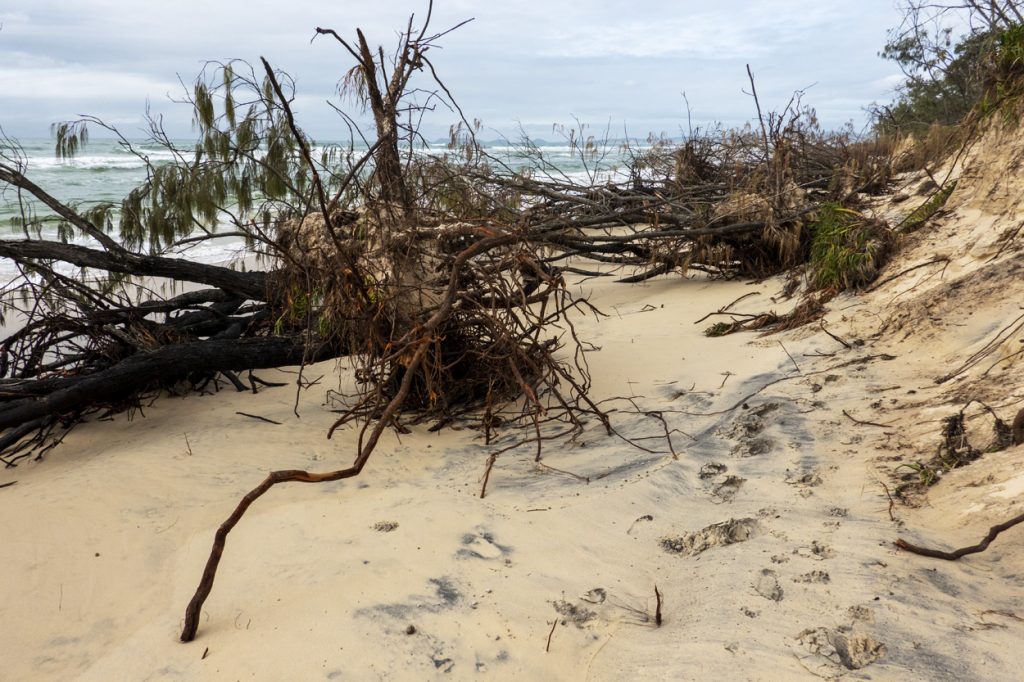 Clearly the recent large swells had done their bit to erode the coastline, so no beach walks. It was around this time that I discovered that the batteries were not charging off the solar panels despite some slightly diffused sun light. After some discussion, we felt it prudent to pack up and head for Gympie. So basically, our Thursday was a bit of a write off.

So, here we are in Gayndah having suffered a full 24 hours of rain. We hope Sunday will be dryer and that we can dry out the canvas.  With more rain forecast for Monday and Tuesday, we have booked a cabin at Moura while the trailer is with the mechanic. I should say that the weather from Binna Burra until we reached Rainbow Beach and the rain was very settled and warming up.

It is now Sunday and, having checked into our cabin, we have found a suitable place for dinner, so I thought I would finish this and post it before heading out. In my next post I will explain a bit more about our stay in Gayndah and our subsequent travels.