It seems to have been a while since my last post, but now that we have arrived at Red Cliff Campground for five nights, I have some time to bring you up to date with our travels (and tackle some other admin matters). Red Cliff Campground is a few kilometres south of Yamba on the NSW north coast and, at last, we are having some warmer weather.

Leaving Sandbar Bushland Camp, we headed north to Port Macquarie where we had booked one night in a hotel. This was most welcome as it meant we had some heat for a change (however, having become accustomed to fresh air, we suffered from the air con!). The hotel was located next to the main shopping area with water views from the back deck. Before heading for fish and chips, we went to the back deck for a glass of red, only to find that it was occupied mainly by members of a Harley Davidson club. They had been there all weekend and were having a ball on their last night – this culminated in a couple of them skinny dipping in the hotel pool – not a pretty sight!

On leaving we made two visits locally, the first to the Koala Hospital and the second to the rainforest centre at Sea Acres, after topping up our essential provisions at the supermarket.

At the Koala Hospital, they receive wounded and sick Koalas and if possible, they rehabilitate and release them back into the wild, as well as undertaking important research. We were quite fortunate as someone had brought in an injured animal and we were able to watch it being checked over. The hospital also has some permanent residents that visitors are able to watch.

The rainforest centre at Sea Acres featured a walk round an elevated boardwalk through pristine subtropical rainforest which had the promise of some interesting animals and birdlife (none of which didn’t transpire – wrong time of day). However, it was a much needed walk before setting off on the next stage of our journey – to Bellingen.

Our objective for the night was Bellingen, but we had left Port Macquarie later than planned, so, after consulting our camp book and Wiki Camps, we diverted to a site next to Warrell Creek in the Gumma Reserve, close to Macksville. We managed to get a site overlooking the creek.

At this point, I need to ask a question: what is the difference between a creek and a river? On our drive through this region, the road crossed quite a few waterways named with ‘river’ and ‘creek’, but there was no discernible difference between them – they were all very wide! Answers below, please. 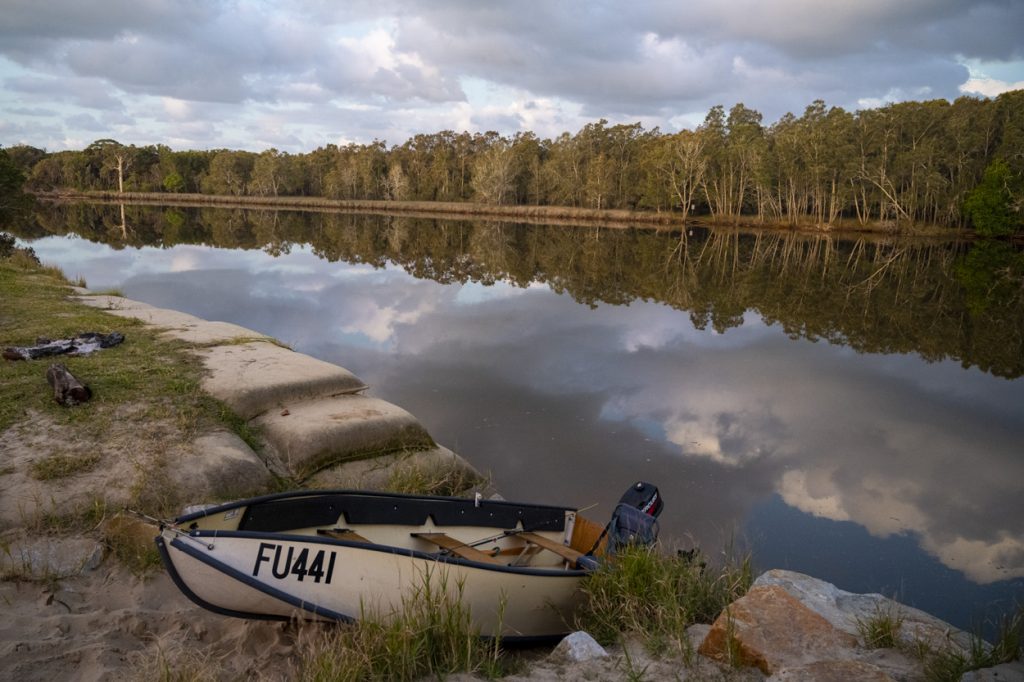 It was almost a full moon, but with a clear sky, still very cold at night. On explaining our next stop to the money collector the next morning, we were told that it would be minus 3 in Bellingen. This made us question our next stop. However, after consulting BOM, we reckoned he was thinking about Dorrigo which is located at a much higher altitude.

The highlight of our stay was on our departure when we stopped to have a look at a Sea Eagle nest that K had been told about the previous day. When we arrived, we were treated to one of them landing on the nest and five minutes later taking off. So, we decided to set up my camera to try to get a shot of this the next time the bird flew in. One and half hours later, we got a shot of the eagle taking off. The wait was not a problem as we didn’t have too far to go. 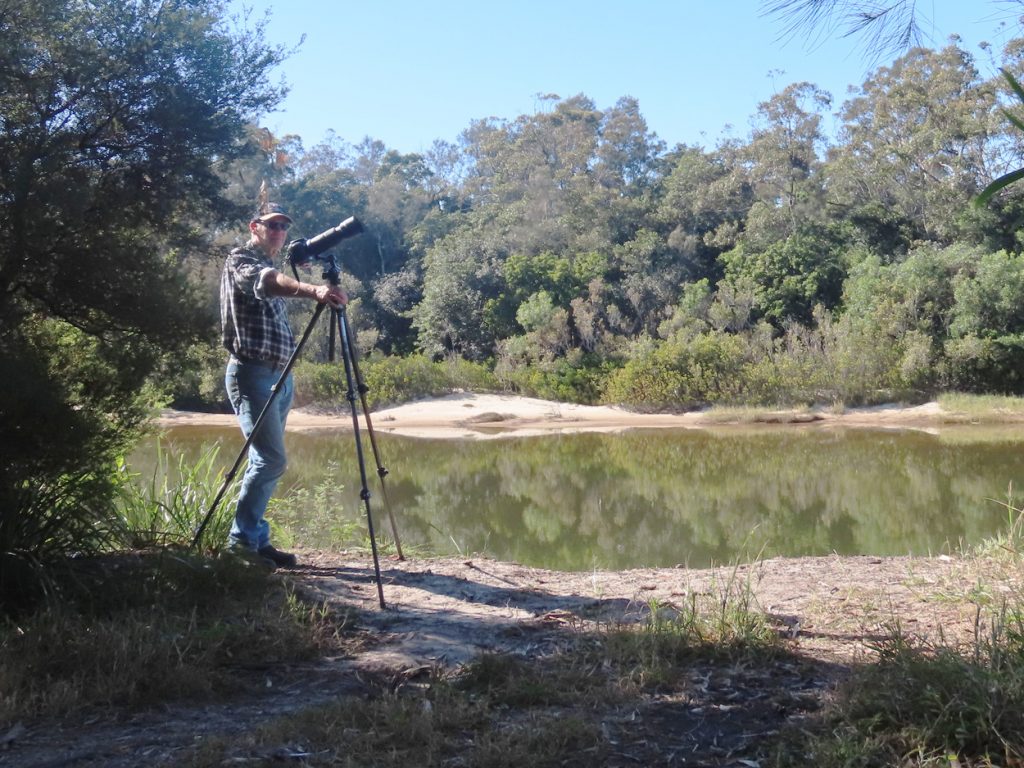 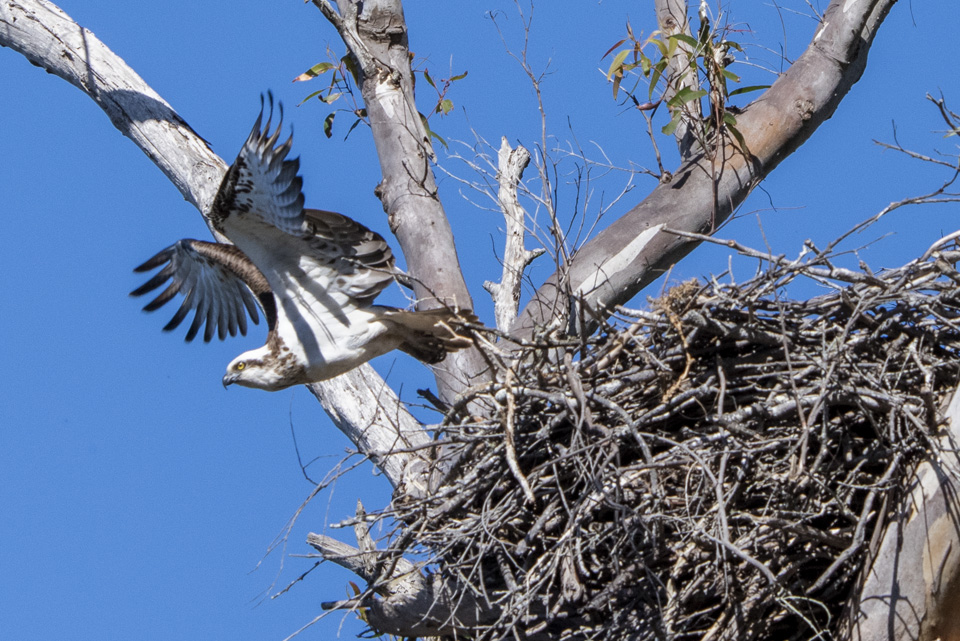 We arrived at Bellingen showgrounds to camp early afternoon. The caretaker told us about a short drive and walk we could do that afternoon, so off we went to Angel Gabriel’s Reserve in the Promised Land through which the Never Never River flows– seriously! The reserve is named after a local character and is a magnet for various alternative types (including female skinny dippers). Anyway, it was a pleasant walk that took up the rest of the afternoon.

On Thursday, we drove to Dorrigo, along the Waterfall Way, to take on a walk or two and to hopefully see some waterfalls. The road twisted and winded up the side of the Dorrigo Mountain to a height of about 750m. Our first stop was at the Dorrigo National Park rain forest centre which features a short sky walk above the tree line to an impressive view down the valley below.

Our 6.6km walk took us through the rain forest and down the escarpment to a couple of waterfalls. At the Crystal Shower Falls, I had my first experience of getting behind the water as it cascaded in front of me. This photo is taken from behind the falls, looking towards the suspension bridge that crosses the ravine. 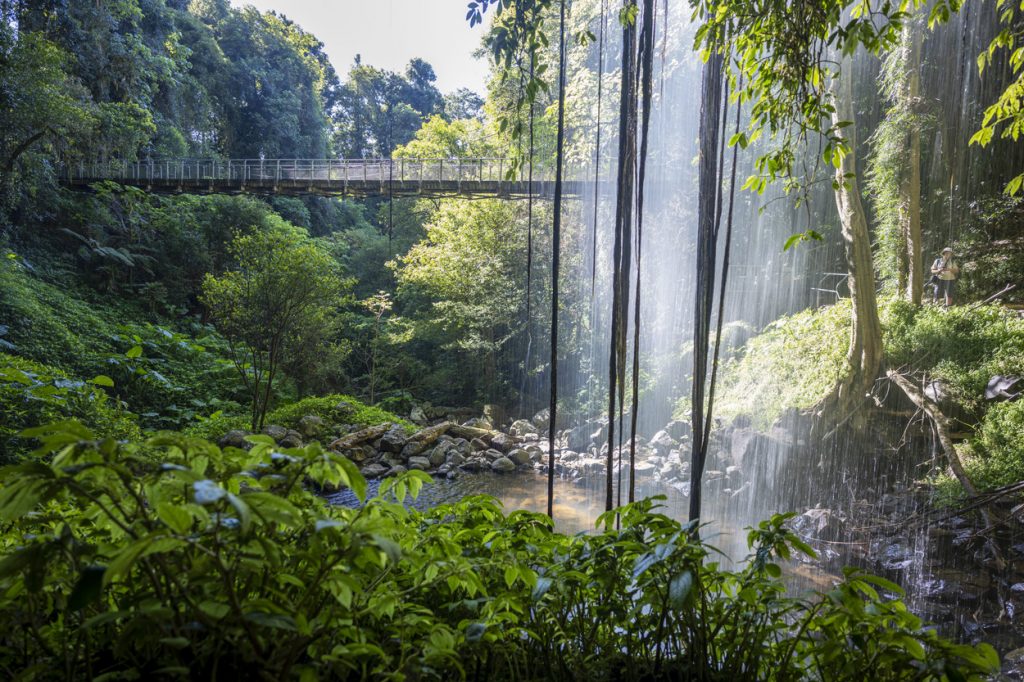 Back at the top and after a quick lunch (pestered by Bush Turkeys), we moved on to the Never Never Picnic Ground at the other end of the Park. From there we completed a short 4km circuit. Back at Dorrigo, we visited the supermarket for some veggies and, as a final stop, drove the very short distance to Dangar Falls. 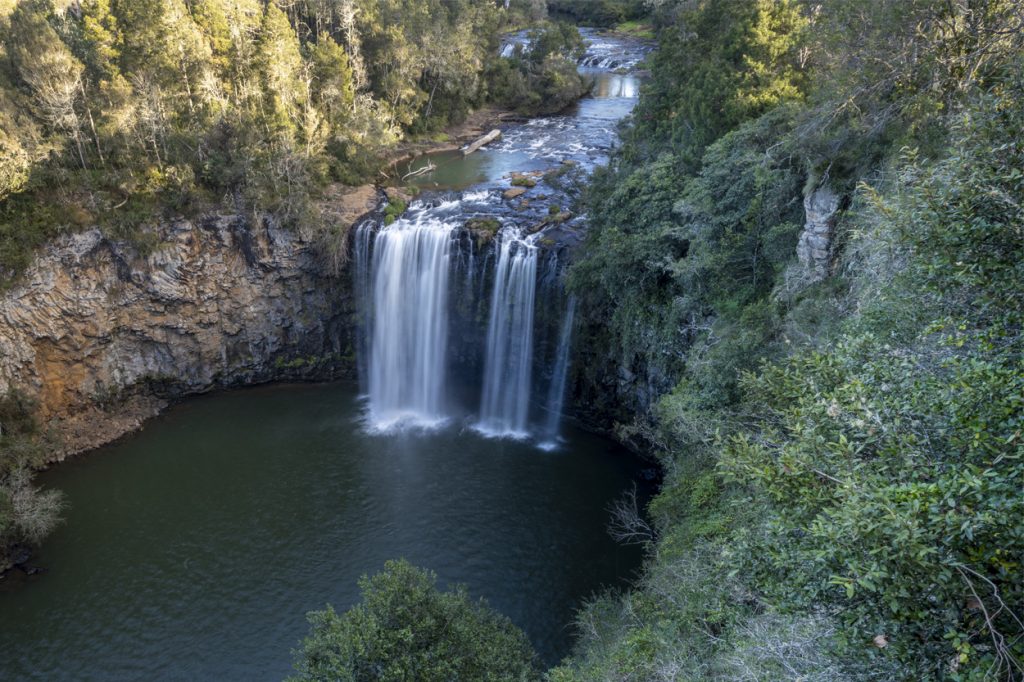 We had hoped to do more, but the short daylight hours got the better of us.

Our route north to our next camp took us through Coffs Harbour where we stopped to stock up on provisions and, of course, snap a photo at the Big Banana.  Along the coast there are numerous small beach side townships. We pulled into one of these – Emerald Beach- for lunch and a short walk to enjoy the views along a long golden beach.

Red Cliff Campground in the Yuraygir National Park is operated by NSW Parks, therefore with fairly basic facilities. The campground was quite busy when we arrived, but now (Sunday) we are about the only campers here, our only day time company being the local kangaroos who are clearly very comfortable with humans. We have five nights in total here, so we are enjoying the opportunity to relax, walk and a bit of driving. The beaches are long, the surf is loud and the temperatures are on the way up. In fact, I hit a milestone yesterday – I wore shorts for the first time on this trip.

One of my photographic highlights here was the reverse sunset on Saturday evening: 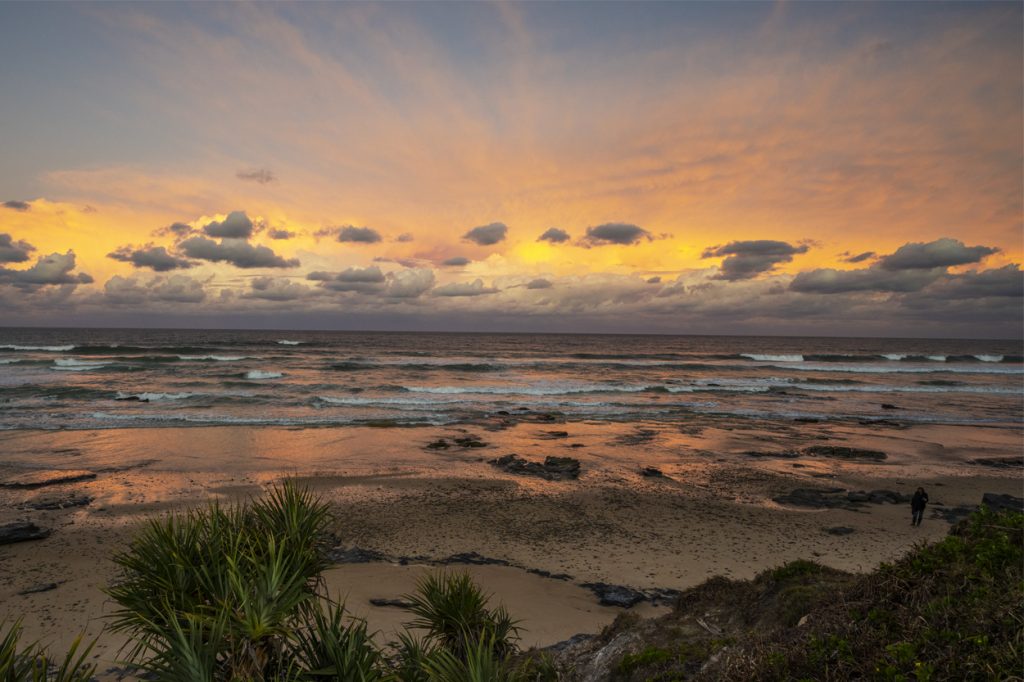 One of our side trips was to Brooms Head from, where we were treated to a pod of dolphins frolicking close to the shore and whales breaching further out – another visit will be made before we leave here on Wednesday.