Leaving home, we knew that the weather was not going to be great, but we were not really prepared for how cold it has been. Our first day on the road, covering almost 650km, was raining most of the way and cold! Our first night in Cowra was freezing so we didn’t get much sleep and the next two nights in Lithgow were even colder, although by the second night there we slept with so many layers that it was bearable. Now we are in a slightly warmer climate, thank goodness.

The first highlight of our trip so far was a visit to the Japanese Peace Garden in Cowra. We had learned about the Japanese connection from an amazing holographic presentation at the visitor centre.

A prisoner of war camp was set up there during WW2 to accommodate prisoners from mainly Japan and Italy. On the night of 5 August 1944, more than 1000 Japanese prisoners attempted a breakout from the camp – 231 died, 107 wounded and the rest escape, only to be captured during the following week.

The prisoners who died were buried close to the site of what was to become the Japanese Garden. During the years following the end of the war, local RSL members tended the graves and as a result, a mutual respect grew between the Japanese and the Cowra residents. In 1973, it was decided to build a Japanese garden, funded jointly by the Australian and Japanese communities. Designed by Ken Nakajima, a renowned designer of Japanese Gardens worldwide, construction commenced in 1977 and was eventually completed in 1986.

The gardens are more expansive than we expected, but a very peaceful place to spend some time (apart from the lawn mower noise). As with many Japanese Gardens, it presented some delightful vistas and colours (we were lucky to catch the last of the autumn. 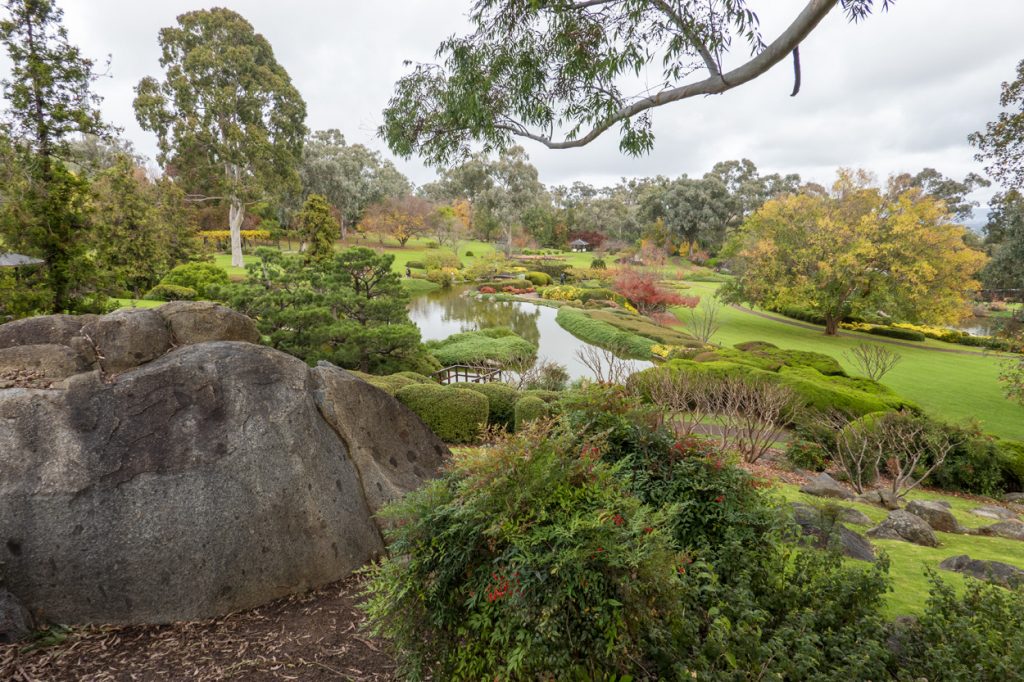 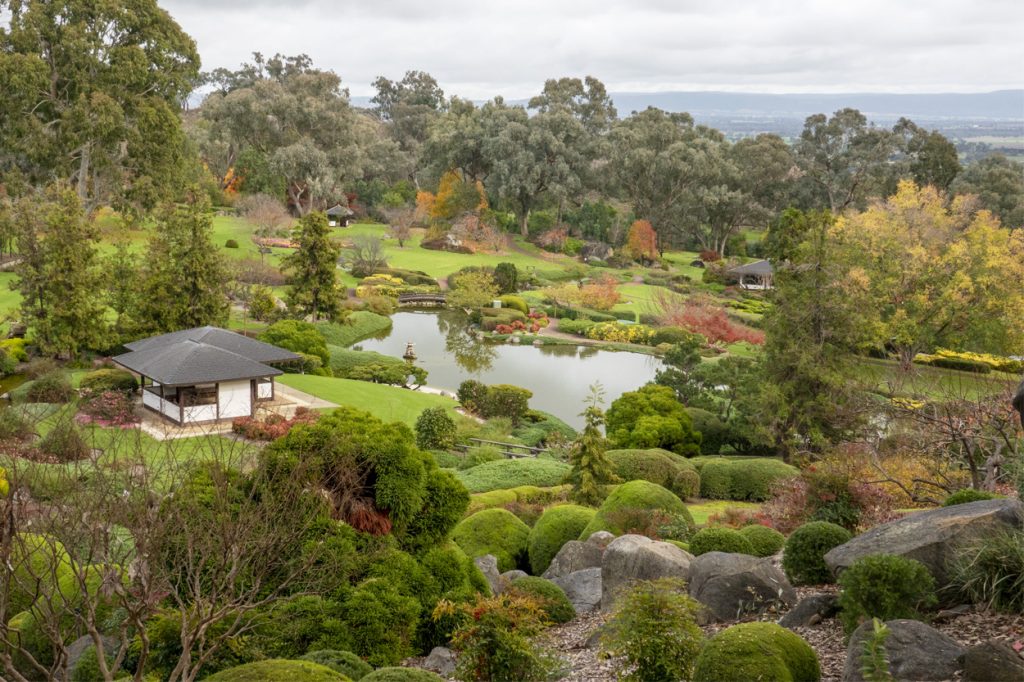 By the time we finished walking round the gardens it was time for a quick lunch before heading north to Lithgow (950m above sea level) where we were due to stay four nights, but only lasted two. It is a pity, because there are quite a few interesting things to do – perhaps a return visit when it is warmer.

We were due to meet a friend from Sydney for lunch on Friday but he had come down with flu and cancelled. We therefore used the day for a visit to Katoomba where there are some remarkable and well known views of the Three sisters and the Blue Mountains beyond.

Our first stop was at Echo Point to view the three sisters and to have morning tea. Disappointingly, the car parking is limited to one hour, so we had to move on. Before doing so, however, we managed a short walk and to spend a bit of time at each of the lookouts.

After finding a handy spot for a cuppa, we drove round to Scenic World. We decided to tackle the walk down to the bottom of the railway and catch the train back up. The walk down comprised a large number of steps, especially at one stage called the Furber Steps. There were a couple of off-shoots that took us to great views of the Katoomba Falls before we eventually arrived at the bottom train station.

The original train was established when coal was being mined in the valley and boasts being the steepest railway in the world – which it certainly is! The railway is one of three ‘Discovery Options’, the others being a Skyway and a Cableway, the latter going down the original coal mine

By this time, we had decided to move on to a warmer area, so we packed up and drove to Denman on Saturday. We checked out as couple of potential campgrounds on the way, and eventually checked into a site in Denman for a couple of nights.

Our stay here ties in with a meeting I have arranged at the Muswellbrook Gallery on Monday morning.

After a much warmer night and a good sleep, we had a quiet Sunday, with a 7km hike up a track to a prominent Telstra tower on tip of a hill, which, in parts, was very steep. It was a great workout, with good views from the top, getting us back to camp for a late lunch and a casual afternoon.