After a very easy 200 km drive, we arrived in Denham for a late lunch, which turned out to be later than we had hoped, as you will find out below. Denham is located on the shores of Shark Bay, almost, but not quite the most westerly point of mainland Australia and we are were there for four nights and have now (Thursday 12/08) landed in a free camp next to the Murchison River (inland from Kalbarri).

On the way here we stopped at a lookout and Shell Beach, where we lingered for a while. The beach here is not of sand, but shells from the multitude of cockles that populate the bay. These Hamlin Cockles are the only life form that can survive in the water here. It has twice the amount of salt than normal sea water due to the high sand bars that keep the tides at bay and high levels of evaporation. Some shells go down 5 metres. In fact, they become so compacted that they form hard ‘rocks’ which in past times were quarried for building.

Arriving at our pre-booked Denham caravan park and on checking in with expectation of lunch, we were told that we could not fill our tanks with water. However, there is a water point about a kilometre away, so off we went and for 2 dollars we managed to fill the tanks. The reason for this is that all the water here is desalinated due to the lack of rainfall and water catchment – sounds fair!

Late that afternoon, we had a torrential shower of rain, which, combined with the strong wind, was not a great introduction to Denham. Our orientation was such that we could not even boil a kettle the whole time we were there! Thank goodness for the camp kitchen!

We decided that our first day would be an early rise to get to Monkey Mia for the 07:45 ‘Dolphin Experience’. This was a bit of a disappointment. We viewed the ‘Experience, from the jetty and watched the experience (which was two members of the audience being selected to feed two dolphins). Apart from the RAC resort there was not much else to do there, except a walk along behind the sand dunes where one of the signs told us that there was a bird hide (We are still looking for it!). Having paid $20 to enter the reserve, I was really disappointed that the information signs along the track were totally illegible due to being badly weathered. All the money clearly goes to the dolphin experience.

On the way back we stopped off at the Little Lagoon. By this time the wind had increased in strength such that the water was quite choppy. We found another access further round where the creek joins the lagoon with the bay. I wanted to fly the drone, but it was borderline too windy and too close to the airport.

Take away fish and chips for dinner and home baked chocolate cake – yum!

We had booked a day out to Dirk Hartog Island for Tuesday, but just before leaving Monkey Mia, we received a text advising us that it had been cancelled due to the weather forecast. We were fortunate to be able to accept the next day alternative, although the weather still looked pretty windy.

So, a change of plan was necessary. We hung around the campsite to catch the census representative as we had a few questions. As a result, we didn’t leave until after 10:00 when we headed for the François Peron National Park. The first few kilometres to the original homestead comprised gravel road in reasonable condition. From there the signage strongly advised that we drop our tyre pressures, giving us an in diction of what to expect.

Before proceeding we took a look around the old homestead. The peninsula used to be a sheep station until early last century when the wool price dropped. As a result of the grazing, the natural vegetation was decimated and in 1990 less than half the 23 species of mammals identified in 1801 by François Peron remained. This was also due to the introduced feral animal populations.

As a result of feral eradication, native animal re-introduction and revegetation, the peninsula is recovering.

We made it to Big Lagoon where we had lunch and got almost blown away when we walked along to a bluff. Because of the wind, we decided not to travel the additional 40km to the point of the peninsula. Instead, we drove south to Eagle Bluff where dugongs can normally be sighted, but, once again, the wind had whipped up the bay it was impossible to see anything below the water.

The only way to get to Dirk Hortag Island is by a very expensive barge ferry, your own boat, your own plane/helicopter, or taking day tour, by boat. Since the first three options were out of the question, we had booked on the day tour. This included a 45 minute Shark Bay crossing, morning coffee, lunch, a four wheel drive tour, afternoon tea and the return crossing.

The boat was not a large one and, although the wind had moderated slightly, it was a very rough crossing, but we survived.

Similar to the François Peron National Park, this was a sheep station with similar impacts. It is now totally free of feral animals, native animals and vegetation are being re-introduced and its primary income is from tourism.

After an excellent lunch we set off on our 4WD tour, across dirt tracks and sands dunes.

The first stop was to the blowholes. This was spectacular and the only way to describe it is by: 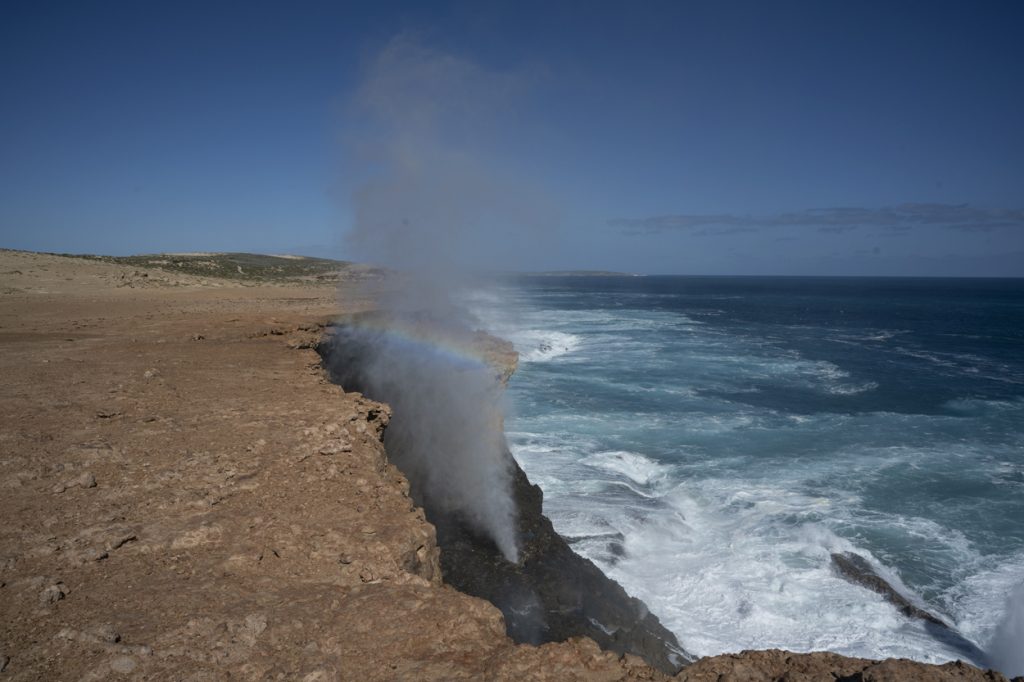 I have a video, but will not be able to upload until my return. We did get a bit wet, but well worth it.

I certainly recommend this outing to anyone visiting the Shark bay area – great value for money.

Our next stop was Surf Point – this photo tells you why it is called this:

We had a very bracing walk round the point and back to the 4WDs. The bay on the back was filled with small sharks called Nervous Whalers – they are very well protected by the sand bar from the larger sharks (who would eat them) out in the Bay.

All too soon we were back on the boat anticipating a smoother trip back, but that was not to be – there were a couple of times we were sure the boat was airborne!

On the way to our campground, we stopped off at Hamelin Pool. This is located further down from Shell Beach and features Stromatolites. Microscopic organisms, invisible to the human eye, concentrate and recycle nutrients which combine with sedimentary grains to form dome like formations called Stromatolites. They first appeared in Hamelin Pool between 2000 and 3000 years ago, taking forever to grow.

It was disappointing to see the sign advising that the boardwalk was closed (this makes it easy to see the formations), but we were able to walk down to the edge of an exclusion zone.

Cyclone Seroja which caused so much damage in this area in April this year ripped part of the boardwalk apart. Considering it is made from reinforced concrete, the damage gives us a great idea of the ferocity of this event so unusually far south.

As I said we are now settled in our free campground, but with no internet access, so it will be Saturday evening before I can post.