Our five nights in Karijini sadly came to an end too quickly and we were on our way back to the coast, heading for Dampier. The drive took us to Tom Price (strange name for a town) and along the access road to Rio Tinto’s railway. This required us to sit through a 20 minute safety video in order to get a permit to use this road – we were expecting something a bit different!!

Tom Price seems to be the centre of a number of major iron ore mines. Unexpectedly, the town was very clean and tidy, with a very new visitor centre. It would have been really interesting to go on one of the mine tours, but time did not permit, maybe next time.

The mining is so intensive that Rio Tinto constructed a railway network, including the line to Dampier. This network, at 1700 km, is the largest privately owned and operated railway system in Australia, serving 16 mines. The access road was built for maintenance purposes, therefore work vehicles and trucks take precedence over us tourists. On our way up we played leap frog with one of the 2.4 km trains which made for an interesting journey. We realised that the line is very busy, counting 6 full trains on the way to Dampier/Karratha and another half dozen empty ones heading back to the mines. We also discovered that these trains are totally autonomous, being remotely controlled from Perth.

The only caravan park in Dampier is what they call a transient park, meaning that the maximum stay is three nights. It was a bit of a shock to us arriving at a very small tightly packed park, after the spaciousness of Dales campground. However, once we had settled in, we saw all the pluses. We managed to: use the fridge/freezer to empty and defrost ours; do a couple of loads of washing and have good hot showers. It had a great view of one of the iron ore loading wharfs and was sheltered from the wind that seemed to strengthen during the daytime and disappear in the evening.

The other commodity that Dampier exports is salt. The drive into the town is across a causeway between salt pans, so we managed to stop to take some close ups.

Dampier itself is not large, with only one supermarket, an IGA. Karratha, a 30 minute drive away, is a much larger town and seems to be the main centre of the area (with a Coles and a Woolies).

Our first full day included a visit to Karratha on the way to Cossack and Point Samson.

Cossack is an abandoned township, now classed as a world heritage site, that ceased to be inhabited in the middle of last century. It has been restored and now operates as a major tourist attraction in the area. I also discovered that there was a Leprosarium on a close by island, thus adding to my story about the one at Bungarun. We also learned about the local turtle soup processing plant and failed attempts to establish an international market.

After a quick look round and a drive to the Reader Head Lookout to view the Indian Ocean, our next stop was Point Samson, at the tip the peninsula. This is a mainly holiday town with a large caravan park and a destination for everyone with fishing as a hobby.

My lasting memory of both these locations is the strong winds – a theme that was to be re-occurring!

It was then back to Karratha for a visit to Coles to stock up on provisions and the servo to re-fuel.

On our next day we made our way to the Burrup Peninsula, easily accessible from Dampier. This is home to the Murujuga National Park, so we had an expectation of a walk or two and possibly catching up with some wildlife.

This was not to be!

The western side of the peninsula is occupied by the North West Shelf Gas plant. This collects gas from four major off-shore wells, processes it into LPG and other commodities and exports it to SE Asia (what happened to looking after the domestic market???).

The track that leads past the plant is one of the worst off-road tracks we have been across, so we did not go too far.

Essentially, we discovered that the national park is inaccessible. However, we had been told about the swimming beach, so we made for that. And what a beach!

About 3 or 4 km from the gas plant on the opposite side of the peninsula, Hearson’s Cove was a great spot for a dip in the ocean. It was very calm, so much so that we both had a relaxing time in the water!

The only other highlight in the park is some aboriginal paintings. These were on a series of rock piles accompanied by explanations of what we were looking at – it was amazing to think that some of these were estimated to be 30,000 years old.

On leaving Dampier, we stayed one night at a road side overnight camp. This was next to a river, well it was almost dry, that offered opportunities for bird and landscape photography. 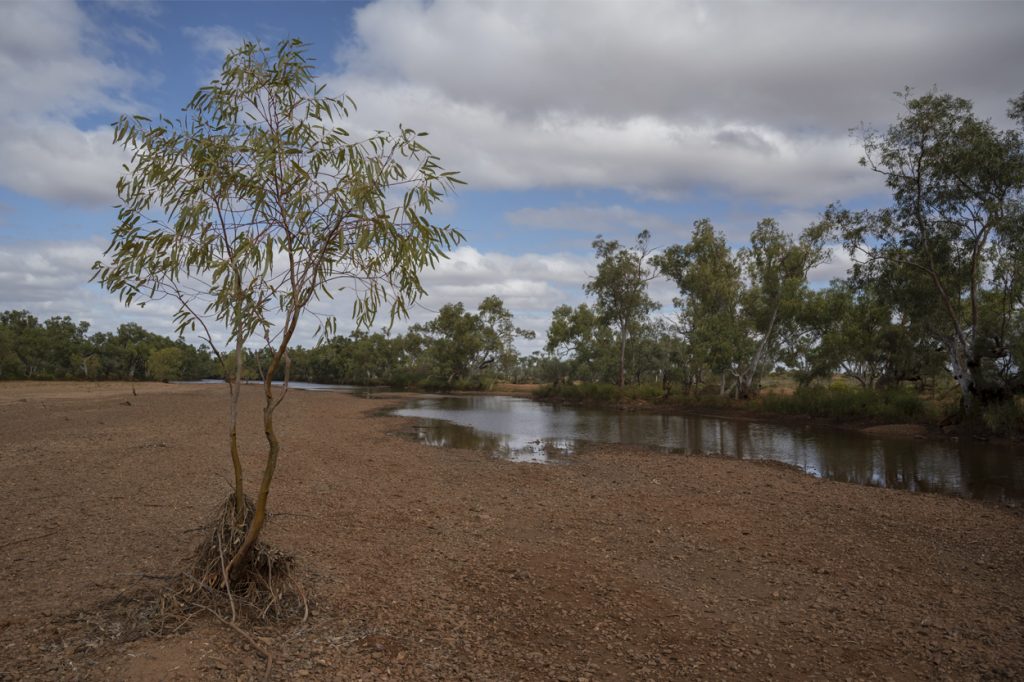 We are now camping for five nights at Yardie Homestead on the North West Cape surrounded by the Ningaloo Reef. Lots to do and see here, including a glass bottom boat trip. I will report more about this towards the end of this week. It is very windy here and the temperature about 20 – 22. We are also starting to see more of those fluffy white things in the sky!

As an update about my camera being damaged in Hancock Gorge – the basics are working, but a few functions including video are not working at all. So, it will be booked in for an assessment on my return to Melbourne. In the meantime, I still have my other camera.