Our next destination after Birdwood Downs Station was a prebooked campground half way up the Dampier Peninsula called Banana Well. When we were trying to book, this was the only place that had the last remaining vacancies on the whole of the peninsula. In anticipation of our stay, we had, after much consideration, decided to book a day tour to the Horizontal Falls. The booking fell on our second full day, but as with some other aspects of our trip, this did not go to plan!

Our three nights here were very comfortable, except for the first night when the campground generator kicked in at 5 o’clock and didn’t go off until 11 o’clock. The generator was housed in a shed in a direct line of sight to where we camped. When I spoke to the camp manager about it and suggested that the door be closed, I was told that there was no door. However, the next two nights the door that didn’t exist was actually closed, making our nights much less noisy.

Unfortunately, most of the aboriginal communities, including Beagle Bay. were closed due to Covid. However, we took a day trip to Middle Lagoon where we had lunch and a swim in the Indian Ocean (no crocs). The road in is very rough, but nonetheless, this is a very popular spot with two pristine beaches.

The second day was the big day for our tour that was to include:

As we were due to be picked up at Kooljaman at 06:50 and we had a 100 km drive to get there, we were out of bed at 05:00 and on the road by 05:30. After waiting for our pick up for over half an hour, we called the out-of-hours number only to be told that the tour had been cancelled. They had phoned two days previously, but with us not having mobile reception, we had not received the message.

I must say, Sophie, at the other end of the line, was great and very apologetic. She organised for us to have a complimentary breakfast at the resort and said she would try to find another tour for us. She also told us that another of their tours was due in and that, although it had two spare seats, it would be returning direct to Broome, so we could not join it. To cut a long story short, the leader of that tour told us that her airstrip had changed due to high winds and that, if we were interested, we could join her group for the visit to the hatchery. As only tour groups are permitted access, we jumped at the chance.

The hatchery visit was really interesting, made all the more entertaining by the aboriginal guide’s presentation. The hatchery was set up at the beginning of last century for a research project. Once this was finished the locals took it over for breeding and as a tourist attraction.

Saturday was to be the last day of Horizontal Falls tours due to the tides being so low for a four-day period. It was also the day we were transferring to the Bird Observatory near Broome for three nights.

Sophie managed to find as couple of cancellations for a half day tour to the Horizontal Falls – on Saturday, leaving Broome airfield at 11:40. As this tour included a 90 minute flight on a small seaplane to the pontoon and a 60 minute flight back and did not include the cruise round the island, K decided not to go on it. However, with much encouragement and persuasion (not!), she talked me into going on my own.

So, an early packing up at Banana Well, the 120 km drive to the Bird Observatory to drop the trailer and the shortish drive into Broome, got me to the airfield in plenty of time for take-off at midday.

The flight there took us over the Dampier Peninsula, Kooljaman, the Buccaneer Archipelago before landing at the pontoon in Talbot Bay

On arrival, we were given the opportunity to watch the sharks being fed and to listen to a commentary about sharks and their way of life. These particular sharks are bottom feeders, but are happy to be fed by the staff. The organisers have a licence from the Parks department to feed the sharks under strict requirements. This ensures that they do not become dependent on their snacks.

After that we went back on to the pontoon deck for a seafood lunch – not shark, but grilled Barramundi. Delicious!

The King Sound at Derby features the second biggest tidal range in the world. With two small gaps into two large expanses of water, the water level difference between each can be as much as 4 metres. This is due to the backing up of the tidal flow at then incoming and outgoing tides. It is this flow that creates the horizontal falls and it is these gaps that the speed boat takes us through. The flow is very turbulent and a great experience for any thrill seeker!

Although looking very narrow, the first gap is the wide gap and the second, at 7 metres wide, is the narrow gap. Our boat captain took us past and through both gaps a few times to allow plenty of photo opportunities. I managed to take as few video shorts, mainly to show K, but I will try to make time to combine them and upload them. 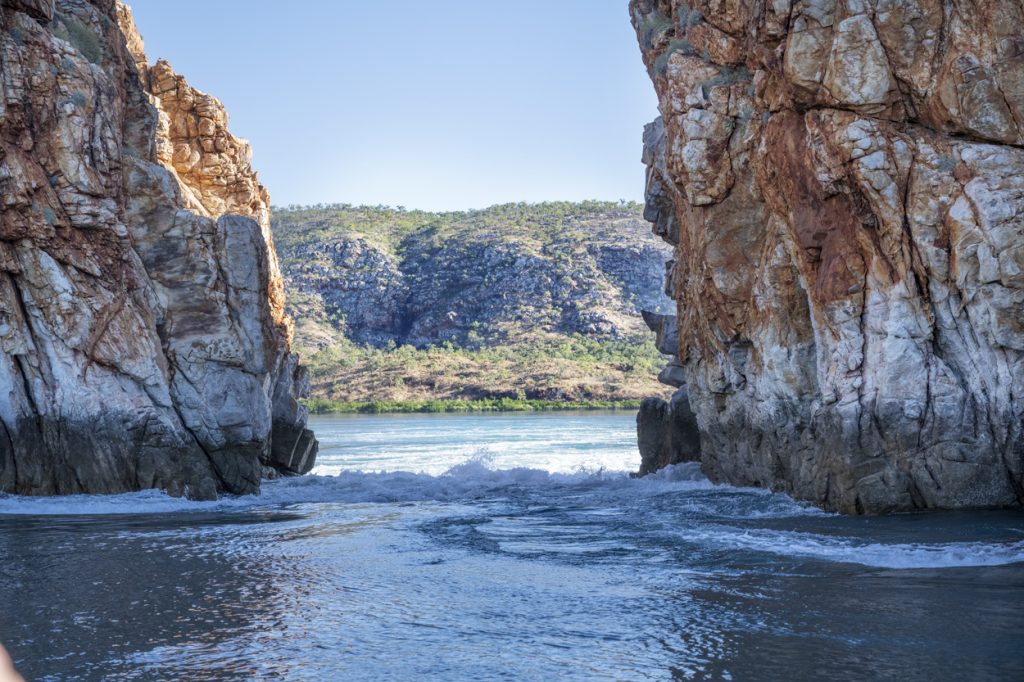 The return flight landed us back in Broome, where K was awaiting to pick me up, at 5 o’clock.

This was an experience that should not be missed on any visit to Broome. OK, it is quite expensive, but being on it I understand why – it is well organised, well staffed and packed full of value.

Anyway, we managed to get back to camp before dark and finish setting up the trailer at the Bird Observatory.