Having spent a week wondering if and when we might be able to get away, we were delighted to hear that Victorian regional restrictions were to be lifted last Thursday at midnight. This meant that we managed to escape from Gisborne to Broken Hill on Friday (4 June). We decided to take the chance and not risk the outbreak increasing and/or creeping into regional areas. So, on Friday morning, we set off with the sole intention of crossing the border into NSW. This we succeeded in doing, but the journey since then has been anything but straightforward.

It is now the evening of Thursday 10 June and at long last we have some positive news and direction. I started to write this a few days ago, so here is an update on how we managed to get from home to Broken Hill.

The NSW option gives us the choice of crossing into QLD or, preferably into SA whenever the borders open.

Avoiding the Greater Bendigo city limits (an original exposure site), we crossed the border at Echuca and headed for Hay where we planned to spend the first couple of nights and then head for Menindee Lakes.

On entering NSW, we did not encounter any checkpoints, although we had our permits ready to hand if necessary. So, our drive up to Hay was pretty uneventful, with one exception.

On driving through Mathura, we saw the strangest sight – a bra fence. This is a fence with over 1000 bras hanging from it with the intention of raising awareness of breast cancer. I must admit, I wonder how the owners relieved themselves of their attire: did they take it off there and then; did they take it out of their dirty washing or did they unpack a brand new one. On a serious note, it is a worthy cause and certainly catches the eye of passing motorists.

At Hay, we camped at Sandy Point Campground on the Murrumbidgee River. Although a very large campground, which we estimated would take about 50 caravans, it was very well catered for and looked after. The toilets were immaculate with a small bench, hand soap and paper hand towels, plenty of picnic tables and a few free barbeques.

Having stayed in Hay Friday and Saturday nights, our plan was to drive to Menindee Lakes via Ivanhoe, along the Cobb Highway. Stopping at Ivanhoe for the most expensive diesel yet, the kind lady who served us let me know that the road to Menindee was closed and that we would have to go through Wilcannia, a further 175 km up the road! This road was in the process of being tar sealed, as a result there were long sections of temporary, very rough dirt road making the journey more interesting than the flat landscape that we passed through. It also slowed us down, to the extent that we realised we would not make our final destination that day. So, we checked into a caravan park just outside Wilcannia for the night.

On checking the road closures for the next day, we discovered that the road we had intended to take to Menindee had opened around the time we left Ivanhoe! Such is life!

We left Wilcannia at about 10:00 and headed down 154 km of dirt road to Menindee, pulled into town at the information office and the supermarket for bread rolls. We had identified the Burke and Wills Campground for a couple of nights. This free campground is located about 18 km NE of the town. There were plenty of spaces here and even with a number of later arrivals, we were very much away from others. The evidence of the heavy rain that had closed the roads was everywhere, even the 10 km of access road into the campground looked as if it had just opened.

This campground is the site of the Burke and Wills base camp that they started from on their ill-fated final exploration, as explained in these two photographs. 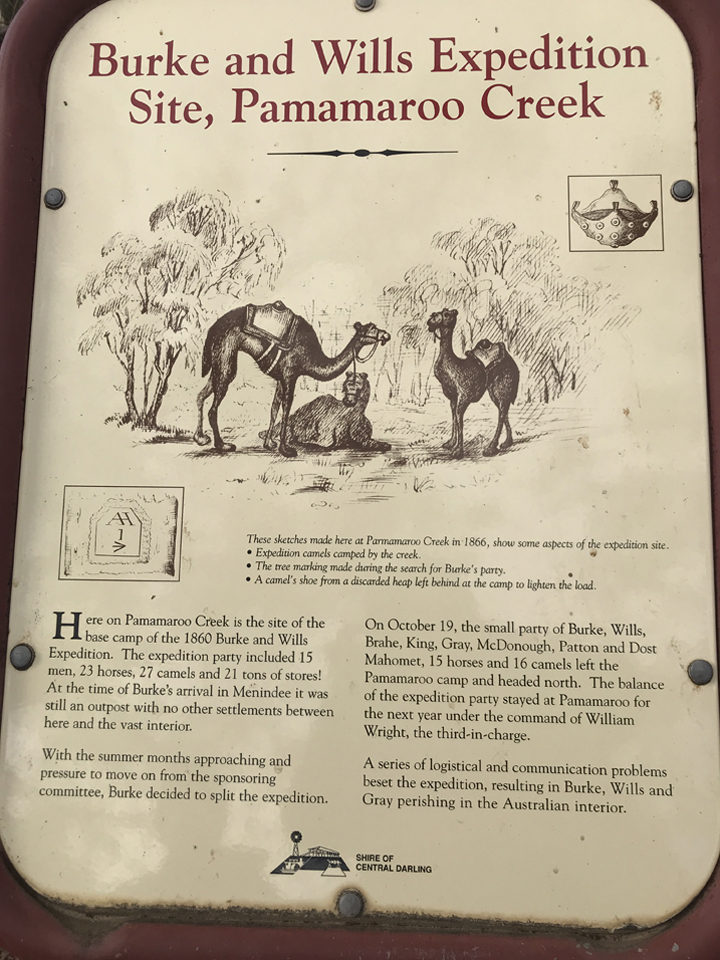 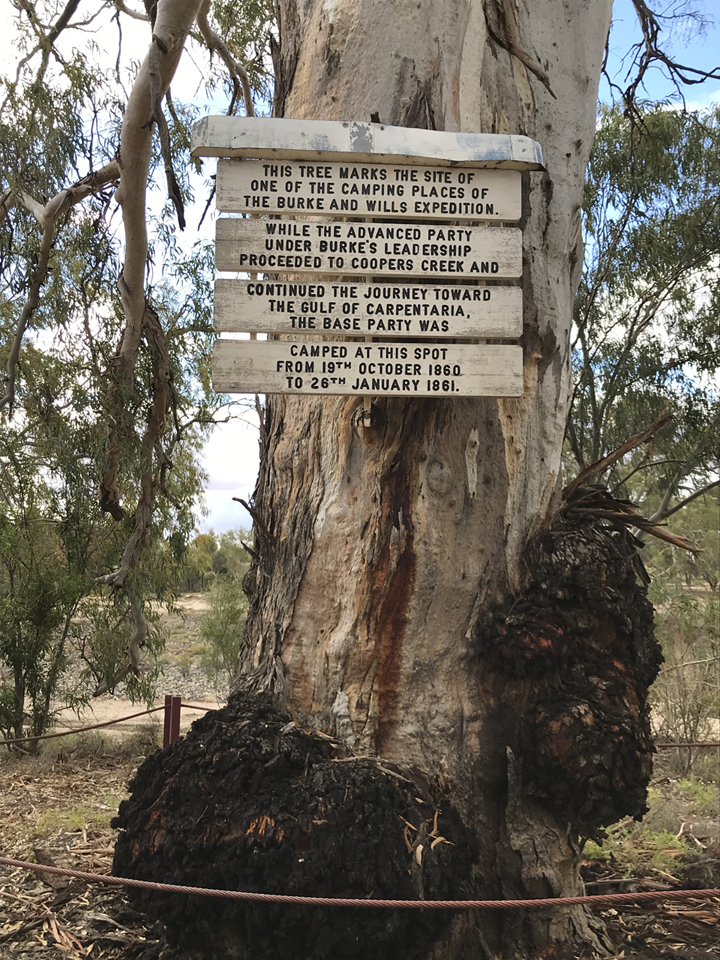 The area here is surrounded by a series of manmade lakes, part of the NSW water supply system, with plenty of birdlife and infrastructure, satisfying both of our photographic interests.

After setting up our camp, we walked along one of the dam walls to the next campground. This is next to the outlet that is the continuation of the Darling River, with flows controlled by a series of sluice gates. I saw this as a great drone photo opportunity, so decided to return at first light to avoid shooting into the sun.

During the night, the wind increased in strength and in the early hours we had some heavy rain, putting, I thought, my plans for an early drone flight in jeopardy. However, at first light the wind had dropped and I managed to shoot a few images from the drone, see my previous post.

We decided to visit Kinchega National Park, but all the roads were closed so we drove through the middle and back, a bit of a disappointment.

And still the wind blew! In fact, it was blowing directly into our gas hob such that it blew out the gas. This meant a cold meal that evening, followed by a very noisy night.

We packed up early on Wednesday morning to drive the short drive to Broken Hill. This was a pretty unexciting drive, with the landscape being basically flat and treeless. The one highlight was stopping off the road on a dry creek bed for morning tea – it was quite sheltered from the wind and would have been a great bush camping spot.

On arriving in Broken Hill, the first priority was to buy a Telstra dongle to add to my Optus phone so that my internet access is not limited and the second to buy some food basics. From there it was off to the campground we had booked. Our hearts sank when we saw it! It was totally exposed the westerly wind which was increasing in strength. There followed a bit of a saga that I will not go into. We dropped the tent top for fear of it ripping apart, left the trailer there and booked into a pub in town for the night.

During the day today we managed to do the tourist bit and visited Silverton and the sculpture park. The plain to the east of Silverton is where the original Mad Max movie was filmed and where they are about to start filming the next iteration in the next couple of weeks.

This evening the wind has eventually started to ease, but most importantly we managed to successfully apply for permits to cross the QLD and NT borders. So, it will be an early start tomorrow to drive up the Silver City Highway, across the QLD border and on to a campground called the Burke & Wills Dig Tree.

Once again, time has limited how much of our adventure I can share, but now that we have only one more border to concern us, this will hopefully improve and I will be able to sort out some photographs for you. That said, internet access during the next few days may be very limited.

However, it is a great feeling to be on our way and getting to our goal – Western Australia to pick up our original itinerary.