With reference to my previous blog post, the instances of derelict examples of the built environment have been very few and, when there is a potentially a good example, it is inaccessible. For example, I write this at Charnley River Station campground, approximately 40 km north of the Gibb River Road. The property includes a ruined homestead at Old Beverly Springs, a further 20 km up the track, but it is totally inaccessible on account of the track being in such a state of disrepair. I felt it a bit unreasonable, but the station management wouldn’t even lend me their chopper of half an hour!

So, in response to a comment on my previous blog post, I have a couple of examples of the natural built environment.

The header illustrates a very naturally stack of rocks, although it looks like a man-made dry stone wall – it has been fascinating seeing all the different strata structures along the way.

The first is the termite mound, of which I understand there are three varieties (but until I can get internet access I cannot verify this!).

The first is the ‘cathedral’ type. These were most common on my way north between South Australia and Dunmaree and, of course I didn’t take any photographs of these (but I will on my way home). However the first image is an example of a single spire.

The second type has been most common on the road from Kununurra and, without knowing its name, it is most like an organic organism. Clearly, when the mound gets too small for the colony, another ‘blob’ is added. The next two images show a single example and a complete ‘village’.

The third, I believe, accommodates magnetic termites, with their mounds being flat along the north south axis. The purpose of this is to minimise heat gain at the height of the midday sun. These have so far proved illusive. If and when I find one, I will post an image.

The next example is that of the mud wasp, setting up home in the cool under overhanging rocks. Mud wasps are not unique to the north of the country, but again illustrate how their communities can expand in a modular fashion. This image also illustrates (towards the bottom) that humans are not the only species to desert their homes and leave them for mother nature to take its course.

My final example is a spiders web. The type of spider is unidentified as yet, but it uses the structure of a bush to give its home its integrity. The colour, by the way is the dust from the dirt road! 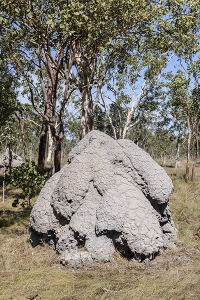 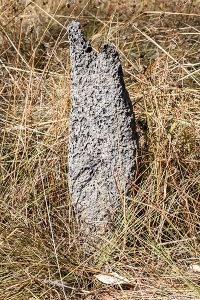 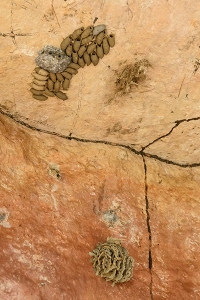 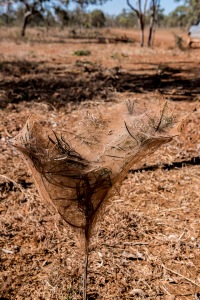