It is now more than a week since we left the red centre, and even longer since we arrived at Kings Canyon. I have been a bit slack in preparing a post about our adventures there, although, in fairness to myself, we have also covered a few kilometres since then, leaving little time for writing and reviewing heaps of photographs.

Our visit to the red centre took in two camping locations and three key features: Kings canyon, Uluru and Kata Tjuta, all of which has generated some interest in geology and how these were formed. I had bought as book in Allice Springs about the geology of Uluru and Kata Tjuta, so I arrived there with some very basic understanding.

Anyway, our first stop after leaving the West MacDonnell Ranges via the Mereenie Loop Track was Kings Canyon, staying at Kings Creek Station rather than the resort, a very busy caravan and camping ground, complete with shop, bar and restaurant. The station campground met our preferences perfectly, with plenty of space, not too crowded and the necessary range of amenities. The slight down side is that it is about a 30 minute drive to the canyon.

We stayed two nights, with the full day allocated to tackling the Canyon Rim Walk without rushing it.

After a steep climb of numerous irregular steps, we reached the start of track around the entire perimeter of the canyon. Starting off early morning was a good time except that everyone else also thought it a good idea. However, with everyone walking as different paces, we soon spread out.

I must say from the outset that Kings Canyon is quite spectacular – the colours, the vistas and the rock formations were breath taking, resulting in numerous photographs, of course.

The grade 4 6.0 km walk was estimated to take 3 – 4 hours, it took us just under 4, including stops for lunch, the many photograph opportunities and the 600m detour to Cotterill’s lookout. We decided against the detour to the Garden of Eden due to concern over knee pains.

The fascinating rock domes of the Lost City and the ripples embedded into one of the pavement areas of rock (from when they were under the inland sea) have an amazing geological story to tell (more about that later).

Some of the rim edges look as if a knife has sliced off sections, leaving a very smooth surface.

On our return journey to the campground, we detoured to walk into Kathleen Springs, a short 2.5 km walk. This canyon comes to a fully enclosed end at the spring and, because of this it was used by the Aboriginals for trapping animals such as kangaroos and latterly by settlers for mustering cattle.

On reaching the end, there is a viewing platform and a seat where we were able to rest and contemplate of past and present in the surrounding silence. 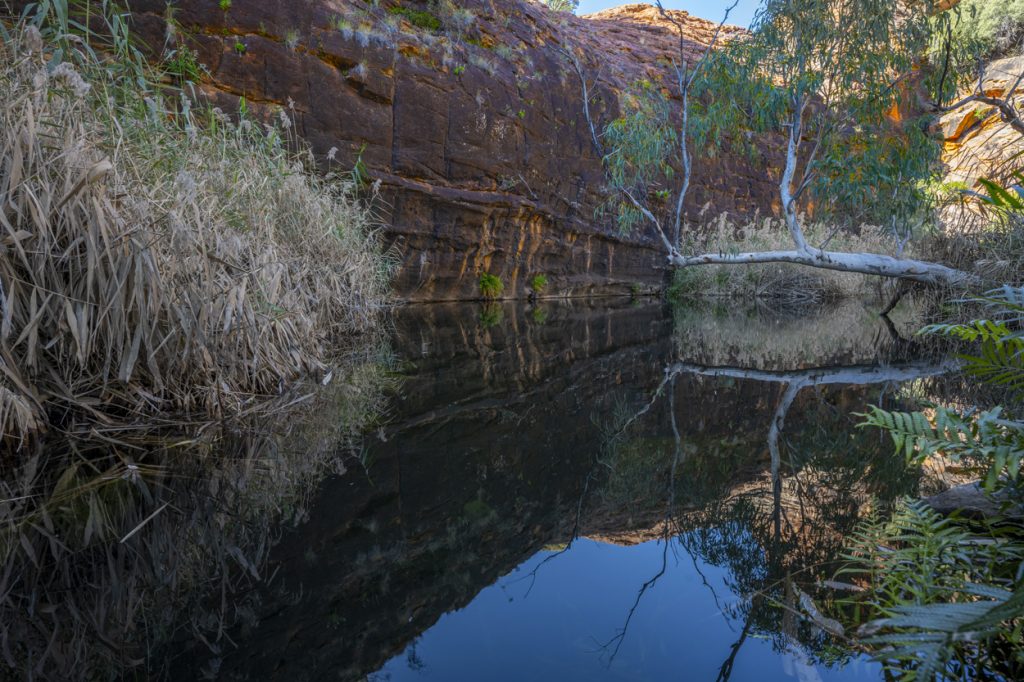 Despite our preference to avoid resorts, we stayed three nights in the campground at Ayers Rock Resort, one of the many options at Yulara, a mini town set up outside the Uluru national park. This is the closest campground to the rock and as we wanted to experience the sunrise and the sunset, it was the only choice.

Previously known as Ayers Rock, Uluru sits in a national park, the freehold of which was handed back to the traditional owners in 1985. In return, the park was leased back to Parks Australia on a 99 year lease, one of the major requirements being that the traditional names were to be used rather than the European names. (Kata Tjuta, originally The Olgas, falls within the same national park)

Our first full day was for walking 10.6 km around the base of the rock. My original concept of the rock was that it was mostly smooth, however, this was quickly dispelled as there are numerous indentations, caves and overhangs all the way round. 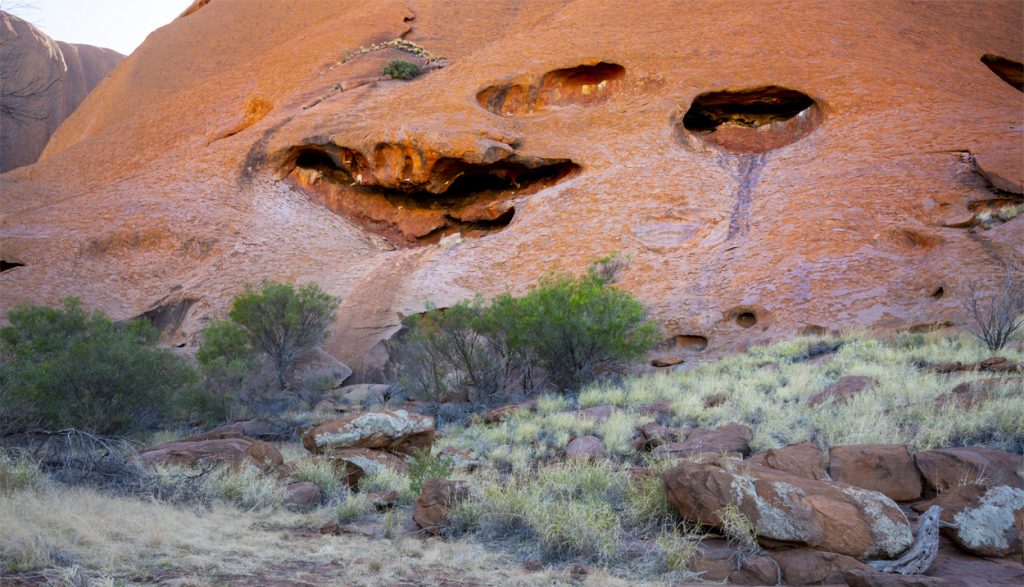 One of the features is the Mutitjulu Waterhole, a very spiritual place of quiet and calm reflection. 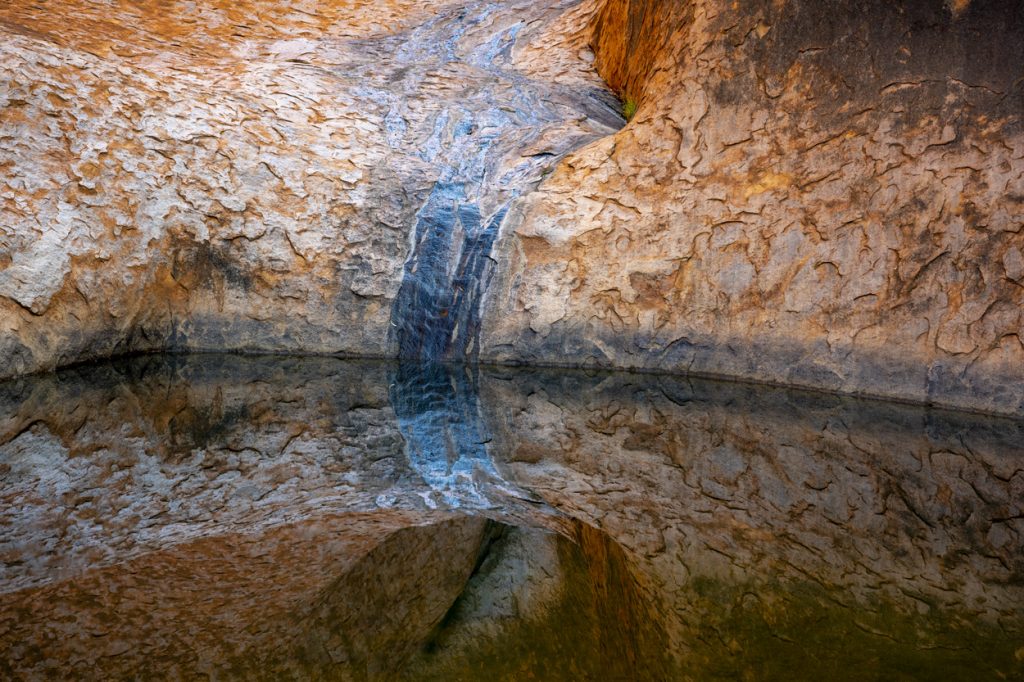 The next day, we drove out to Kata Tjuta and first off, tackled the Valley of the Winds walk. We had heard that this was quite a challenging track, but there were only a couple of sections that were a bit tricky. This 7.4 circuit walk was spectacular, featuring two lookouts along the way. The second, Karingana Lookout, was at the top of a long climb to a saddle, the other side of which presented a view across the valley to one side and the track we had climbed to the other. 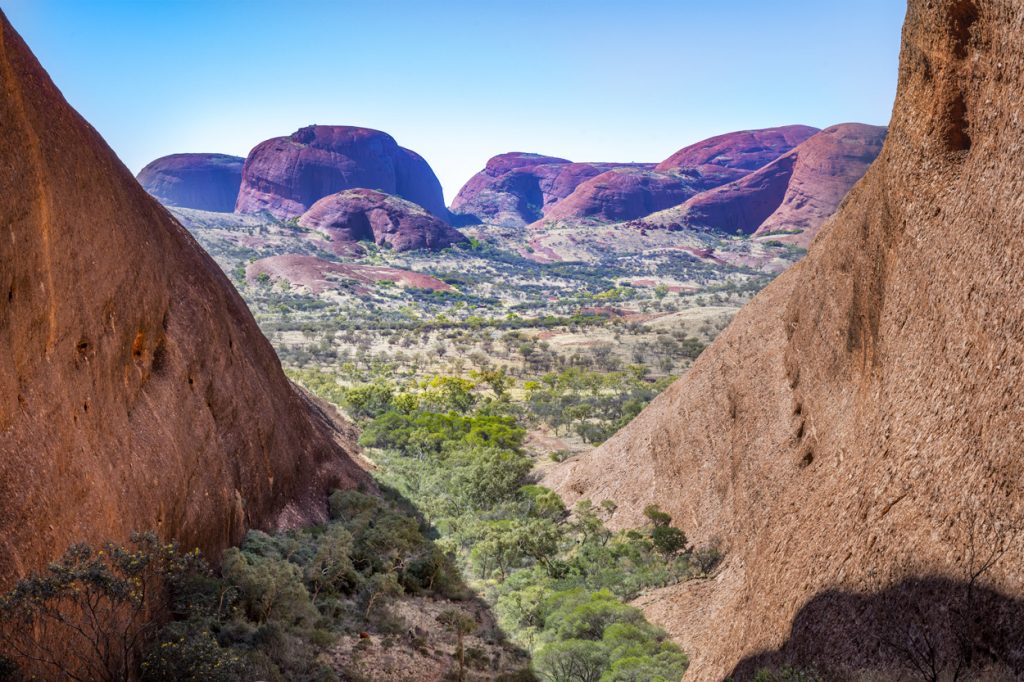 After the straightforward descent from the saddle, it was a comfortable walk back to the car.

Our next stop was the sunset viewing area for lunch and then to the second walking area – Walpa Gorge. This was a short 2.6km return track up the gorge between sheer cliff sides as it narrowed towards the end – the effect was quite overpowering.

King Canyon, Uluru and Kata Tjuta are incredible landmarks. It is therefore no wonder that they attract so many visitors – all were very busy.

At first sight they both Uluru and Kata Tjuta appear to be the same, but they are radically geologically different.

I took a lot of photographs and plan to work on them when I get home and include them in individual posts about each of the three main landmarks visited in the red centre, with a. bit of focus on their geological differences.

At Kata Tjuta, the park management had provided drinking water at the start and end of the track, but the only toilets were at the sunset viewing area. Uluru was also sadly lacking in toilet facilities, these being confined to the visitor centre.

At Kata Tjuta, the tracks were being upgraded with inset rock mosaics and at Karingana Lookout, they were constructing seating areas for visitors to enjoy the view. I wonder how much of this has been influenced by the major tour companies to make it easier for their customers to access the site. Perhaps they would have been better spending their money on toilet facilities.

At both Uluru and Kata Tjuta, we were asked not to take photographs of certain areas due to their cultural sensitivity – unfortunately these tended to be the most photogenic.

Interpretive signage at all three locations was excellent and really helped us understand mole about the local flora and fauna.

All sights were ‘No Drone’ areas. I totally agree with this, but regret not being allowed to fly as some images would have given a different perspective of what we were seeing.

If/when I return, I would like to spend more time at all landmarks at different times of day and to take a helicopter flight over them.