Rather than the planned four nights at Litchfield, we only had three, meaning that we didn’t have time to cover all the possible walks and waterfalls. However, we managed to squeeze in as much as possible, starting with the afternoon we arrived.

What we didn’t realise, until our search for the wheel bearings in Katherine, was that the following weekend was a long holiday weekend. This meant that we had to brace ourselves for some busy roads and campgrounds. We were already booked at Litchfield on the Friday night and were fortunate enough to book Katherine Gorge Caravan Park. I say fortunate, but it didn’t turn out to be that great.

But first, I need to bring you up to date with our visit to Litchfield National Park.

These were both fairly close to our campground, so we drove to and parked at Buley Rockpool. After a short walk we arrived at a series of rock pools formed as the river flowed down a series of cascades – every one of these was pretty full already (not that we were aiming to get in the water. 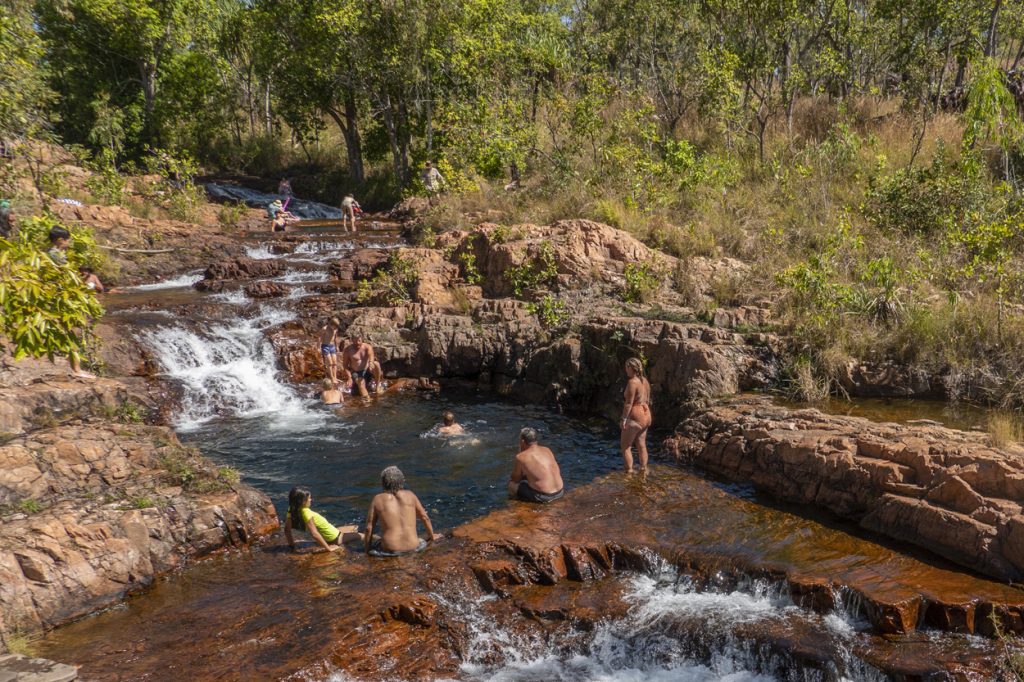 Florence falls is connected by a 1.5 km walk along the river, so off we went. It was a 33 degree day and, with portions of the walk fairly exposed to the sun, it was a tiring walk. However, we made it to the lookout only to discover that there was a quite a drop down to get to the base of the falls and the swimming pool. We decided not to tackle that and returned to the car park and to the campground.

We had booked a 12:30 lunch cruise on the Mary River Billabong. This promised us sightings of various wildlife including salt and fresh water crocodiles, Jabirus and other water birds and a range of different vegetation. On the drive there we diverted to the Fogg Dam bird hide where we saw some Spoonbills, ducks, magpie geese and loads of Egrets.

The cruise was excellent, made more so by our guide, Evan, who was both very knowledgeable and entertaining, It was helped by being a small group of 29 in the boat. We managed to see everything that was promised, as well as a White Bellied Sea Eagle and its nest.

By the time we returned to the campground it was time for dinner, so we had a pizza at the camp bar and listened to live music for a while.

Wangi Falls is the largest waterhole in the park for swimming and its shores is home to as large colony of flying foxes. We arrived well before 09:00, just as they were settling in their trees for the day – the noise was incredible! One advantage of arriving so early was that there were very few others around and I managed to get a few shots of the falls without the usual tourists in the picture. 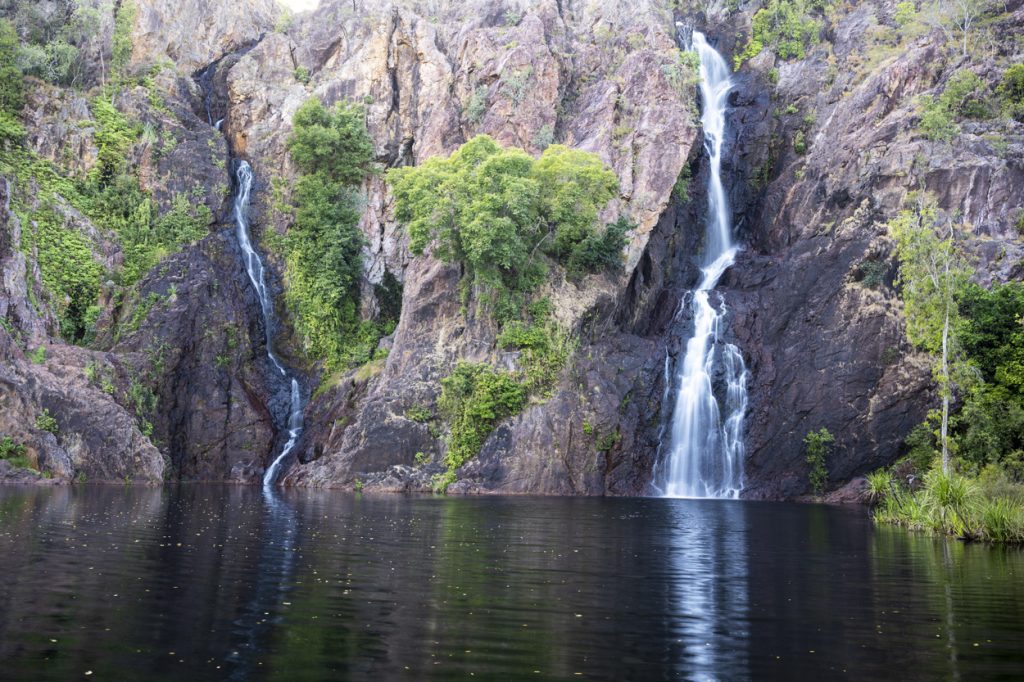 We embarked on the loop walk to the top of the falls, across the Wangi creek that feeds the falls and back down again. By this time, the car park was almost full and the pool at the base of the falls had quite a few swimmers.

Our next stop was Greenant Creek with a walk to Tjaetaba Falls. The first part of the track worked its way along the line between the savannah grassland and the rain forest, before starting to rise and rise and rise. After such a climb, I was hoping for a good view of the waterfall, but all we got was a good view of a tree with the water falling behind! The climb was worth it for the shallow pools above the falls where we were able to soak our tired feet in readiness for the descent.

We were going to drive past these, but at the last minute, we turned in to the access road. The track to the lookout was only 500m and well worth the brief diversion

Our final stop for the day was to view a large plain of Magnetic Termite mounds. These are so called because they present a very narrow edge to due north with their main faces pointing east and west. The reason for this is to minimise solar heat gain. Scientist have demonstrated that the termites somehow know where north is, guided by the earth’s magnetic field, by placing magnetic fields with a different north pole adjacent to the mounds, with the result that the orientation of the mound is altered to suit. Termites are quite amazing insects!

Sadly, our departure from Litchfield on Saturday marked the start of the return journey south, away from the warmth and eventually back to the cold. Our main initial objective was Alice Springs on Tuesday 02/08. We had three days to cover the 1200 km. Our first stop was Katherine Gorge, the second just south of Dunmarra and the third at the Devil’s Marbles.

I mentioned earlier that Katherine Gorge Caravan Park wasn’t that great. We arrived around mid afternoon to check in to our booked unpowered site. We were given a map, shown the areas where we could camp and sent on our way. After driving round and round, we eventually found a rather tight spot next to a camper van while others had acres of space. Basically, we reckon the long weekenders arrived on Friday to claim their spots without any regard to other potential campers. The campground was crowded and the toilets really could not cope, with queues common in both male and female blocks. It was also the most expensive campground we have visited.

The reason we had booked there was its proximity to the departure point for the 4 hour cruise we had booked, departing 09:00 on Sunday. The cruise took in three of the gorges with short walks between each. It was an enjoyable, relaxed and informative cruise, but we felt that shorter one would have sufficed. Our last hour was free time to swim in one of the waterholes.

Immediately after the cruise we hit the road aiming for a free rest area south of Dunmarra. This was fine, except the road trains roaring past like jet rockets into the evening and starting up again early morning.

Monday night was spent at the Devil’s Marbles, a natural phenomenon of granite boulders piling upon each other, with some split in half. The campground was compact, but each site was very spacious. Apart from the rocks the sunset and sunrise were quite spectacular by bringing out the colour of the red granite. We very much enjoyed camping there, but with another 400 km to go before arriving at Alice Springs, we were packed up and away by 08:30.

With a couple of stops on the way, we are now in a hotel for a couple of nights in Alice Springs. It is likely that there will now be a gap in posts of about two weeks due to the lack of internet connection as we make our way through the East and West Macdonell Ranges, Kings Canyon and Uluru.

I will be back on line as soon as possible.