As I explained in my last post, we arrived in Gayndah on Friday afternoon, having stopped in Gympie to have the batteries checked. The campground we decided upon was the Heritage Railway, not surprisingly, adjacent to the disused Gayndah railway station. As we were expecting the rain, we erected the awning so that we could cook meals and, in the process, keep dry.

The town is spread across the Burnett River and is a central hub for the citrus fruit growing industry. In fact, the railway was key to the distribution of the local fruit until Queensland Rail withdrew from rail freight in favour of road freight. It was this decision that heralded the end of the railway through Gayndah – it operated from 1907 until the last train departed in 2008. The station closed in 2013

However, the locals are doing an incredible job of creating a tourist attraction out of the old station and sidings. The whole site, including the campground, is very well kept and maintained. The $5 per night per person fee goes directly to the upkeep and development of the site. From a visitor perspective it was great value for money, especially as one of the volunteers, Des, leads a one hour guided tour at 08:30 every morning through two of the carriages on display. Having worked for Queensland Rail for forty years, Des was very informative and as you can imagine had a few good stories to tell.

The four carriages in question, all M class Sunlander carriages, were acquired by the Gayndah railway enthusiasts and transported to form a permanent display. They are: a club car, a restaurant car, a guard’s van and a sleeping car. (The Sunlander travelled between Brisbane and Cairns from 1953 to 2014). It is a testament to the local community that over $30,000 was raised to purchase and relocate the carriages from Bundaberg and to provided mains power and water to each of them. 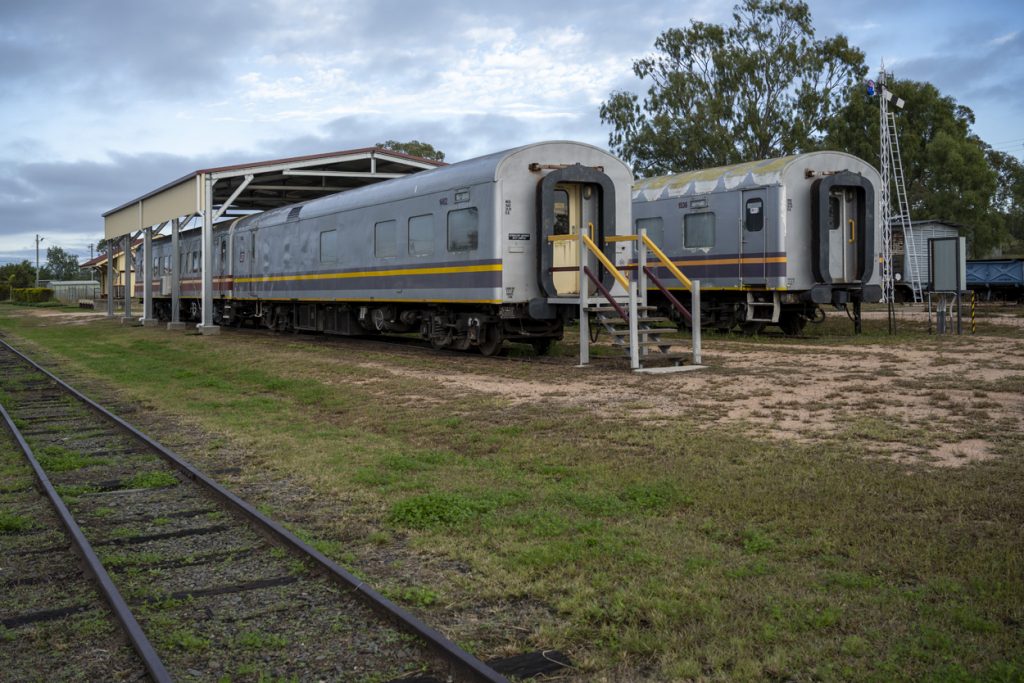 The club and restaurant car are available for community use, with plans to offer Sunday breakfast once a month (thereby not competing with local businesses). They are even planning to open the sleeping car as overnight accommodation.

Along the old railway line that is a loop off the main north bound track, there are a number of heritage bridges designed by the same engineer using materials that he could lay his hands on. As a result, they are all different in design. The one that we were reasonably able to access was the upside down bridge – this photograph explains the name. 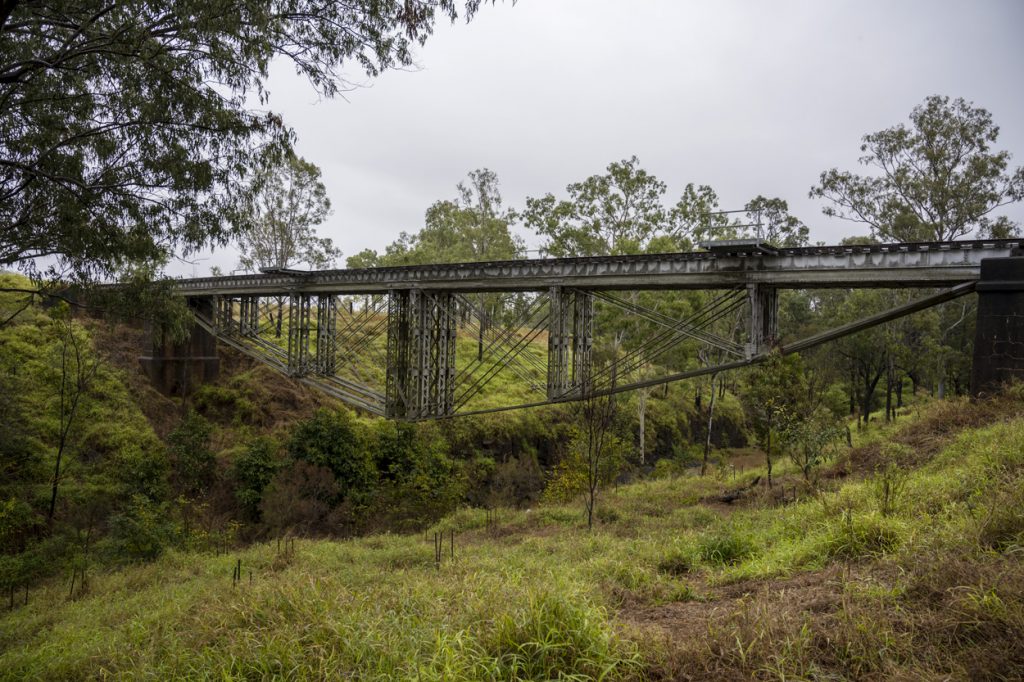 Our Saturday guided tour, led by Des, was a welcome relief from the constant noise of the rain falling on the canvas – it started around 5 o’clock on Friday afternoon and continued until about the same time on Saturday. Fortunately, by the time we started to pack up on Sunday, the canvas had dried out.

On the subject of rain, the Burnett River is normally very low and we were surprised to see the flood markers go up to 19m. Apparently, back in 2013, the river flooded to above the bridge and into the town – considering the width of the river, the amount of water is almost unimaginable. Apparently, 2500 pigs floated down the flooded river, with 1600 being recovered and numerous other livestock, including a cow that was found alive kilometres down stream.

The flow is now controlled by a weir and after our 24 hours of rain, the weir spilled and the increase in water was evident on the river bed.

We arrived at our caravan park cabin after a drive of about 3.5 hours, booked due to more forecast rain. On the way into Moura, it was clear what the two main industries are: coal mining and cotton growing.

The Dawson mine, the first in Australia to export to Japan and the first to use draglines, originally opened in 1961. Today it produces millions of tonnes of highest quality coking coal (used for making steel). Unfortunately, it was also the site of three major mine disasters (1975, 1986 & 1994), which combined took the lives of 39 miners. The town has erected a memorial to all the lives lost in these disasters.

After another night of rain, but keeping dry in the cabin, I took the trailer to the mechanic. Soon after dropping it off, we received a message to say that the pads were OK and were certainly good for the remainder of our trip. Although good news, it was rather annoying that we had taken the detour when we could have been further west away from the rain. As it happened, it was still early enough on Monday for us to head directly to our next planned stop, Carnarvon National Park.

One of our key milestones is our booking to go to the camel racing at Boulia. Our itinerary had us arriving on the Wednesday, but we were advised by another traveller also going there, to try to get there on the Sunday as the temporary campground at the race track fills up very quickly. So, with some rescheduling and bringing our three days at Carnarvon National Park forward, we will now be able to arrive at Boulia on Sunday 11 July.

I am a bit behind with writing – we are currently about to leave Carnarvon (Thursday 07/07), having had a really enjoyable time and good, day time weather, but still cold nights, here. In my next post, I will describe the really interesting walks we completed during our two day stay.