After four nights at Red Cliff Campground, our next stop was Binna Burra in Lamington National Park, Queensland. By the end of the weekend at Red Cliff, we were about the only campers left, but here are a couple of associated stories.

On the Tuesday, the day before we were due to leave, we decided to go for a walk up the coastal pathway towards Shelley Beach Head, a return distance of about 14 km. Now Tuesday, the 21st, was the winter solstice which, I am sure you are not aware, is also Naked Trekking Day!

Off we went up a really enjoyable track with lots of bird life to photograph through changing vegetation until the track descended to the beach where we decided to continue along the deserted beach. Unfortunately, about 1 km from the Beach Head, an outcrop of rocks prevented us from proceeding. The return leg was equally enjoyable, but I guess you will be wondering if we participated in the theme of the day – what do you think?

Unfortunately, we did have a very unpleasant experience on the Sunday night. We were the only campers left in our little area and about 10.30 after being in bed for half an hour, the V8 came roaring down the road and into our area, stopped and shone a high powered light into our awning, roared off, back again and off again. As you can imagine, this was pretty scary, we lay awake waiting for their return, which thankfully didn’t happen. The next morning, we were out and about by 06:30, ready to leave early and managed to catch the ranger. Apparently, one of the campers from another area was the culprit and he had been damaging other areas of the park. One of his mates dobbed him in and we were assured that he would be leaving and that he would be fined heavily.

We were offered a couple of extra free days, but with bookings we had to move on.

We had an easy drive to our next destination, Lamington National Park, bidding farewell to NSW. The last 17 km of the drive were very interesting to say the least, we climbed and we twisted and we turned, seemingly forever. When we eventually arrived at Binna Burra (at 800 m above sea level), it was a pleasant surprise – a small campground with a bunk house and some glamping tents.

Being the host of trail heads for a number of short and very long trails, Binna Burra also attracts a number of day visitors. We had two full days there, so we decided to tackle a decent length each day.

On the middle morning I managed to get out of bed for sunrise, this shot is looking NE across the Gold Coast. 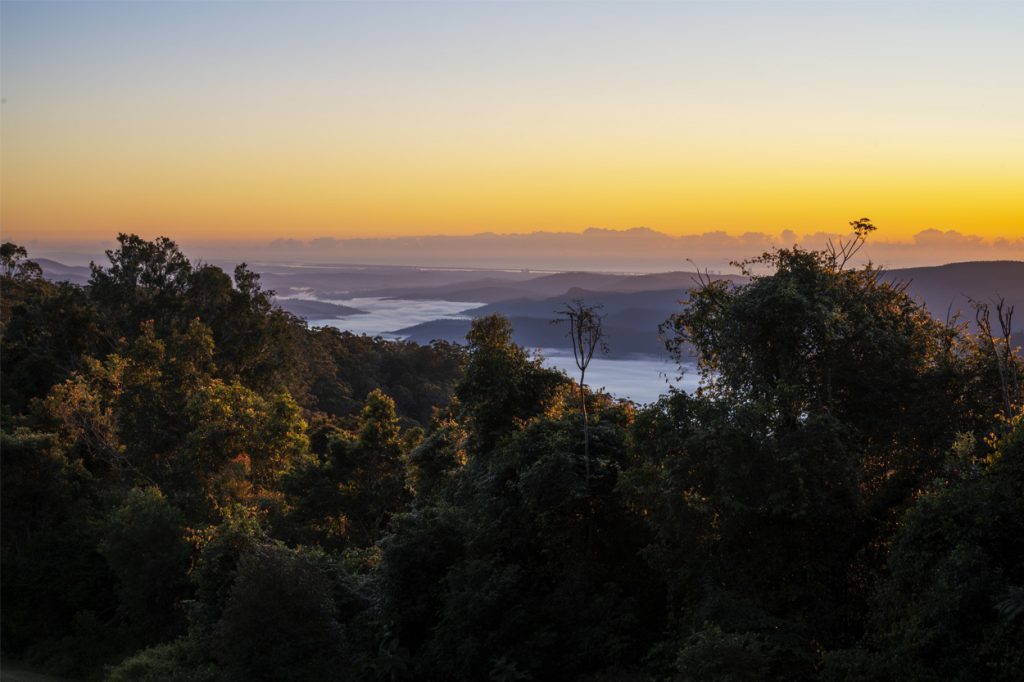 This 17.4 km track was estimated to take 7 hours, so we set out to reach as far as the falls and return. However, we carried on and completed to whole walk, taking us 7.5 hours (which included stops for photographing birds and the many waterfalls on the way). With the elevation dropping by about 200 metres, I was concerned about the climb back up. Coomera Falls was the lowest point with a lookout platform that gave us remarkable views of the falls almost vertically below.

The trek back up was surprisingly easy with many switchbacks and slow inclines. There were many river crossings, some more challenging than others, and a number of waterfalls, most of which I photographed, here are only a couple.

On our second day, we had thought about going to O’Reilly’s, as the crow flies it was only a few kilometres from us, but by road, it would have taken us 90 minutes over roads that dropped in height and rose again – some hard driving. We opted instead to tackle one of the other Binna Burra tracks.

This was a shorter 12 km walk with similar elevational changes as the previous day. However, it features a great variety of vegetation and landscapes along the way.

At the start of the walk, we took a small diversion to photograph the one and only waterfall close to the track:

Two remarkable features were Surprise Rock and a lookout that sat at the edge of a sheer drop with a view across the valley below. Estimated to take 4 hours, we took a very comfortable 5

Both tracks were relatively easy grade 4 walks, but at times we were walking along a narrow path with stomach flipping sheer drops to the side – these really pushed my comfort levels.

I started this post a week ago (it is now Friday 01/07) when we left Binna Burra on 25/06, but only now getting a chance to finish it due to a range of dramas during the intervening period that included driving to the Glass House Mountains and Rainbow Beach. We are now camped at the oldest town in Queensland, Gayndah, with about 72 hours of rain forecast. As there is not much else to do in the rain, I plan to get the next post out in a couple of days.