One of the disadvantages of the cold weather is that the fingers are a bit reluctant to work on the keyboard. However, we have now arrived at Myall Lake National Park, north of Newcastle, camping close to the sandbar at Symes Bay. The weather has marginally improved, but the nights are still very cold, but I won’t bore you with my complaints about the weather.

My visit to the Art Gallery in Muswellbrook was due to it being the home of the Mullins Contemporary Photographic Prize (MCPP) which I have again entered this year with two images, along with my artist statements.

The art gallery presents a very flexible space with moveable walls that can create individual spaces to display a mix of items from their collection or a series of programs by various artists that offer their work for sale. I met Elissa Emerson, the gallery director, and Roger Skinner, a local photographer and key fellow member of the Australian Photographic Society (APS) responsible for the administration of the MCPP. As a result of these meetings, I now have a better understanding of how the gallery and the MCPP operates.

Finalists were supposed to be announced on Friday, but still no news.

Our final destination on Monday was Wangi Wangi on Macquarie Lake, a short distance south of Newcastle. Part of the reason for this destination was to catch up with Colleen and David, both photographers, who I met during my visit to Sea Lake earlier this year. It was great to see them again and to get some local knowledge.

Thankfully the camp ground was very sheltered from the wind, so we were spared the worst of the unseasonal cold snap. It was located close to Wangi Point, with a couple of pleasant short walks through the bush reserve to the point.

On Tuesday, we had lunch with one of K’s friends who she has travelled with a few times – the local RSL overlooking the bay with its moored yachts was a great setting (and the food was excellent). In the afternoon, David helped me to successfully reconfigure the coupling for the trailer.

On the following day, we drove round the lake to Belmont with the aim of completing the walk round the lagoon, where we were supposed to see a whole range of bird species. Disappointingly, when we arrived near the end of the spit into the lagoon to get the views of the birds, access was forbidden due to asbestos removal works – all a bit strange! This unhappy end was compounded by a bunch of kids on their dirt bikes, but that is story that is more worthy telling over a glass of red.

We broke our return journey at another walk described in the tourist book we had – it advertised over 100 species of birds and a track onto a boardwalk. Neither eventuated and the track was badly in need of maintenance.

Despite these issues, we enjoyed our stay at Wangi Wangi and by Thursday it was time to move on.

We had booked our next four nights at Sandbar Bushland Camp, located close to Myall Lake National Park. We stopped off at the Hunter Wetlands reserve, an expansive area that, at the right time of year, hosts egrets nesting, but there was still plenty to enjoy. On arrival we were allocated a site that turned out to be occupied, but after some re-arrangement the staff found us another site. We were almost the only ones there, apart from the permanent residents. However, we realised that this being a holiday weekend, the camp would soon fill up on the Friday – which it did.

While having morning tea on Thursday outside the awning in the sunshine, I was holding a biscuit about a foot from the side of my face when a butcher bird swooped and took it out of my hand. The thing was that the biscuit was too heavy for the bird so it dropped it, only to be scooped up by a very lucky waiting magpie. From then on, for anything we had to eat we were under the awning.

There are one or two walks here, out to the Cellito Beach and in the opposite direction to the sandbar, we took the former. At the beach, I found a good location for a long exposure shot, the subject of my camera club’s weekly challenge. A return visit on Saturday was required to catch the sun in the best position. 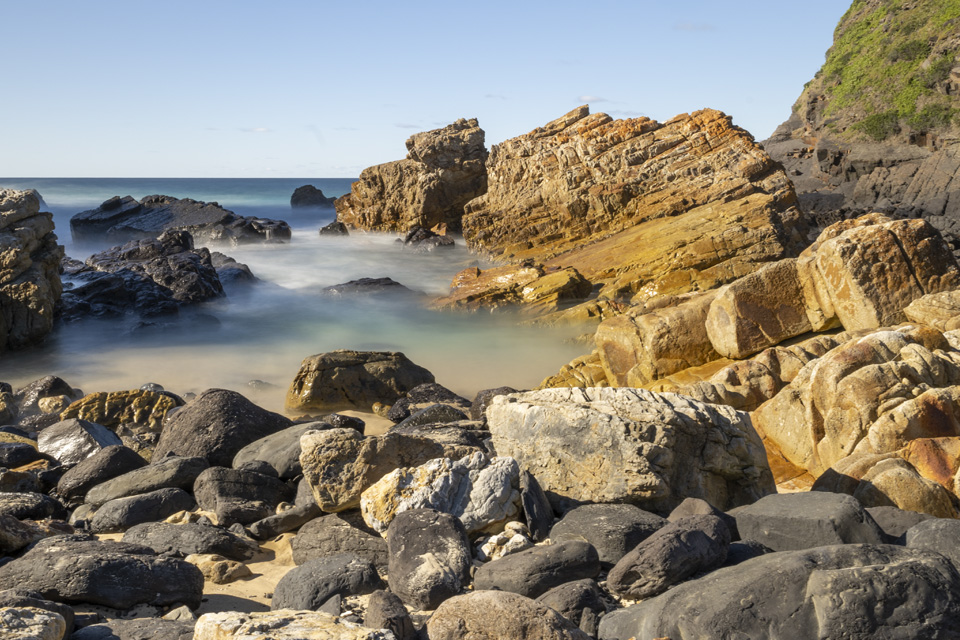 On Saturday we also visited Forster for a few essential provisions and then took a drive to Sugarloaf Point Lighthouse where we had spectacular views along the coast to the south and north. The lighthouse was erected here in the late 1800s due to the high number of shipwrecks on Seal Rocks off the coast.

Today is Sunday, time for a longer walk before hitting the road again tomorrow. We set off from the bush camp down a track parallel to the road to the caravan park. This took us to a track along the edge of the lake to the very sandy sandbar which we crossed along with a constant stream of four wheel drives (clearly their Sunday pastime).

On the way back, we walked up the edge of the dramatic surf that was threatening to soak us, particularly K as she was paddling in the shallows (eventually she mis-judged a wave and got soaked, much to my amusement, of course). This afternoon was pretty relaxed, allowing me to finish this post.