One of the challenges of not having internet access is when to start and stop writing posts, knowing full well that, by the time you read them, we will have moved on and no doubt have another post or two waiting to be uploaded. So, rather than giving you a blow by blow account of everywhere we have been and everything we have done, I plan to describe the highlights and provide you with a summary of the various overnight stops at the end.

However, even within the last seven days since my last post there have been so many highlights that I need to be selective.

Our first stop when we were released from isolation was the tourist information to try to book a cruise. We always planned to do this but were unable to book because of Covid uncertainty. The only one available was a morning cruise on Lake Argyle for the next day, so we booked it knowing we had plenty of time to get to our next destination. We had to be at the cruise pick up point, the Lake Argyle Caravan Park by 7.45 – this meant an early start for the 45 minute drive. Arriving early at 7.30, we were amazed by the queue of about twenty caravans and the like waiting to secure a spot and to check in. Goodness knows what time they must have hit the road earlier. I guess we will see a lot more of that on our travels through the Kimberley.

The cruise lasted just over 2 hours and took as around the many islands that were created when the original Durak property was flooded. It was here that we had our first sight of (fresh water) crocodiles.

We drove north out of Kununurra to the Ivanhoe Crossing, the original crossing over the Ord River. This is a long curved submerged section of road over which the river flows, providing a bit of fun for four wheel drivers. On my 2017 trip, we visited the start of the crossing but didn’t venture across it. This time around, I was determined to have a go across to the other side and back, with my co-driver staying on dry land to take the photographic proof of this mission.

On leaving Kununurra, we arrived at Parry Creek Farm. This campground offers a range of powered and unpowered sites, with campers being well served with showers, camp kitchen and even a swimming pool. We selected an unpowered site, therefore being dependent on our solar panels to keep the batteries charged. The challenge with this is that, if we are away all day, the panels find themselves in the wrong orientation in relation to the sun rendering them less effective. So far, we have been able maintain battery levels at over 50% (although I am not confident about the meter).

One of the big attractions with Parry Creek is Marglu Billabong. This is an important breeding ground for many species of water birds and therefore very popular with bird spotters. K was in her element and took quite a few shots of the birds, as did I. 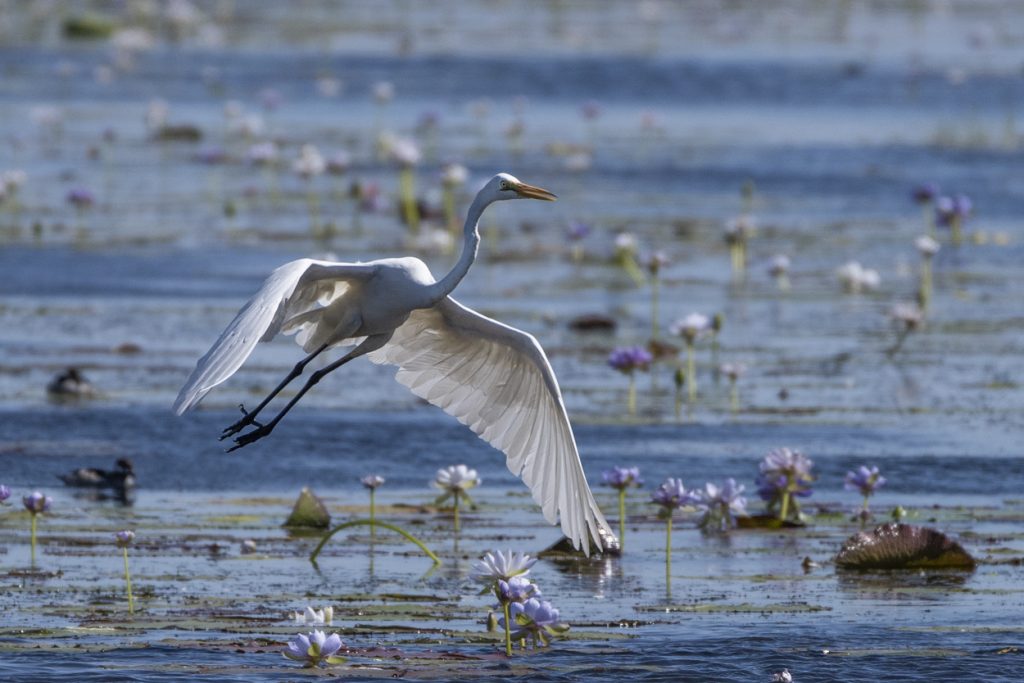 The following day, we paid the billabong another visit before sunset, but the birds were not very active and the sunset, yet again, disappointing. But whether a bird enthusiast or not it is a very special place.

On our last day at Parry Creek, we visited the El Questro Station. The first stop was Emma Gorge where we managed to arrive at about 8 o’clock. After purchasing a day pass for the station, we set off on the 60 minute grade 4 walk to the end of the gorge. This involved a lot of clambering over rocks towards the end.

It was here that I was hit with the realisation that perhaps I am not quite as young and indestructible as I was once. I managed to lose my balance on some rocks and came down hard on my left buttock resulting in a rather painful next few days. Seriously, we both need to take care so far away from home and even a relatively minor accident could have some very serious consequences.

However, Emma Gorge was splendid and at that time of day relatively quiet, however we didn’t go for a swim on this occasion. It was about to get busier judging by the steady stream of tourists heading there as we returned to the car (taking us almost twice as long as it should have done because we had to stop to let others pass.)

I have mentioned previously that having to book ahead limits the flexibility to hang around anywhere that we like. We stayed an extra night at Parry Creek which meant that we regrettably lost one of our two planned nights at Ellenbrae Station. It was regrettable because it was such a welcoming and restful campground set in the grounds of the homestead.

The station is owned by Rino Grollo and family from Melbourne and very efficiently run by permanent married couple and family all year round (what must it be like to be cut off for up to three months during the wet season?). They are very well supported by seasonal staff during the dry.

One of the attractions was a couple of water holes, well away from crocs therefore suitable for swimming. One of these was located down a 2km dirt road – we visited it about an hour before sunset and managed a very welcome quick swim at the end of another hot day.

The other major attraction, which it is famous for, are the scones. Large freshly baked each day scones with jam and cream. This was our afternoon tea – ours being delivered in the photograph below – and a take away for our ‘on the road’ morning coffee the next day. 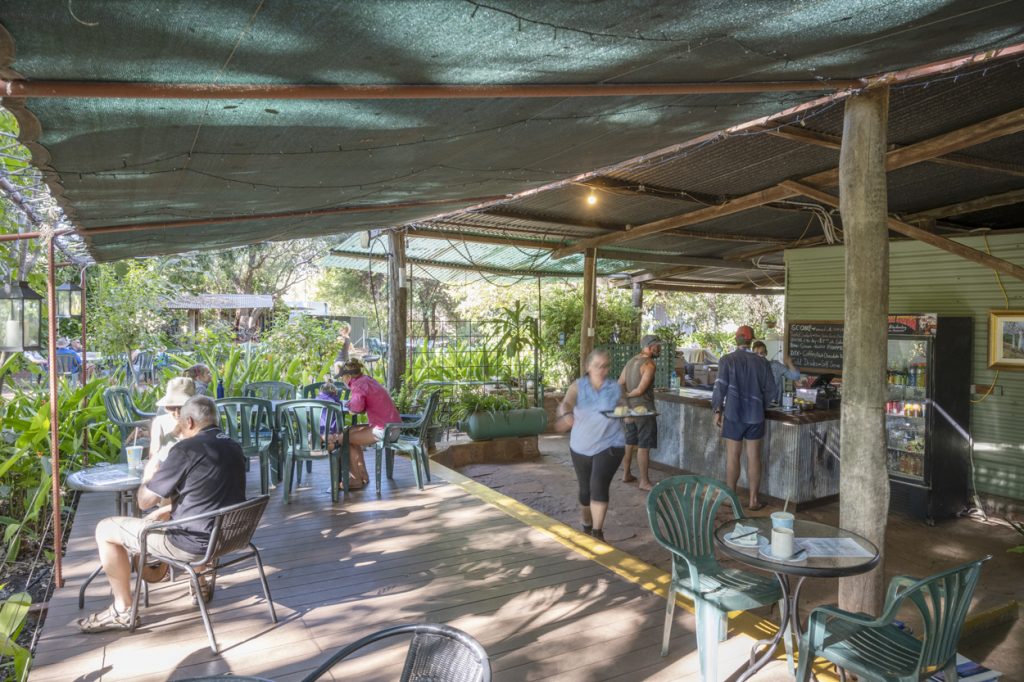 Our next planned stop after Ellenbrae was the Mitchell Plateau. This is accessed via the notorious Kalumubura Road – notorious because of its extremely corrugated surface which has resulted in many caravans, trailers and wagons coming to grief and holidays coming to a sudden end.

From discussions with fellow travellers, the first stage to Drysdale River Station was recently graded, but the second stage to the turn off for the plateau was, to quote one, ‘brutal’. True enough the first stage was fine, in fact better than some parts of the Gibb River Road. However, after a break at the Drysdale Station Homestead and a 20 km of bone rattling drive up the next stage, we stopped and reviewed our situation. We still had 100 km of this to go, plus a 2 hour drive in and the same out of the start of the walk to the Mitchell Falls, plus all the way back in two days time. We decided that the discomfort and risk to the vehicle, trailer and us was not worth it.

So, we turned round and stayed the night at a very ordinary Drysdale River campground.

We took the time to decide what to do next, the outcome of which was to head for Manning Gorge Campground from where I am about to close this post. I will describe this rather special place in my next post.