One of the many stories shared by my friend John over a glass or two of red was of his grandfather who managed three gold mines in a place called Clonbinane in central Victoria. For some reason this caught my imagination and immediately offered to take him there to find out what is still there.

Although it had been thirty years since his previous visit, John described the old timber bridge across Sunday Creek, the poppet heads to the mines, the post office and the old homestead. So, it was with different agendas, his to experience some family history and mine to hopefully take some interesting photographs, we set off on a journey of just over an hour.

Gold mining in the area lasted from 1870 to 1880 and was the main reason behind the township growing to 20 houses, a school and a post office. There are now as few as about five occupied houses.

John did not hold out too much hope that there would be much to see due to the Black Saturday fires that stormed through the area on 7 February 2009 heading for Mount Disappointment and beyond, however we were not too disappointed.

Stopping first at the original township, the original timber bridge had gone, replaced by a steel crossing built by the army, now derelict, and another existing concrete bridge. It was clear that access to the mine sites was through some private properties, so no further progress was made. The post office and the school were also destroyed in the fire. Continuing up the road, we stopped off, but did not linger, at the picnic grounds – a seemingly very popular long weekend spot for campers and trail bikes. 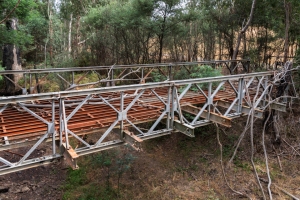 It was only on the way back that we spotted the ruins of the original homestead through the roadside trees so, ignoring the ‘Private Property’ sign, we just had to take a closer look.

Built in around 1885 and located a few kilometres south of the original Clonbinane township, heritage listed Clonbinane Park Homestead now lies in ruins, having been destroyed in the Victorian Black Saturday fires on 7 February 2009. For me this was an ideal subject to add to my growing portfolio of images that illustrate how the abandoned built environment is slowly overcome by unstoppable forces of nature.

Most of the external walls remain standing, some of them in a rather precarious state, with the chimney stacks and, more so, the north facing wall of the residence’s lookout tower dominating the remains. Although I managed to enter the inside of the house, it was impossible to access the front due to the proliferation of blackberry bushes. As we were leaving on the main road, we passed the main entrance drive, but unfortunately is was blocked by fallen trees, preventing us from going any further.

On leaving we stopped and chatted to one of the locals who gave John some further background, including the name of the overall landowner who would be able give consent to access the mine area. So, he is now resolved to undertake some further investigation and follow up with a further visit.

As a bit of a footnote, one of the reasons I enjoy taking photographs of derelict buildings is that, as they decay, their hidden secrets are revealed. For example, the manner in which the door lintels are formed – a light timber beam with a very shallow double brick arch! Look carefully and there are other little gems!

To view the complete gallery of images: Clonbinane