Imagine my excitement when I discovered so many ruined buildings on the road to Alice Springs during my recent study tour, particularly as the theme of the tour was the interaction between the built and natural environments.

I was fortunate that my travelling companion was well versed in the history behind these ruins and of course he had plenty of time to give me the background.

It is all to do with rainfall, the eternal quest by farmers to cultivate new opportunities and the Goyder Line. In 1865, George Goyder, the SA Surveyor General, mapped the boundary between the areas that were sustainable with regard to rainfall and those that were prone to drought. Known as the Goyder Line, this boundary runs approximately west to east, with the areas to the north deemed to be unsuitable for crops.

However, the great thing about advice is that it can be ignored. Around that time, there was plenty of rainfall resulting in substantial numbers of farmers moving north, cultivating the land and building their new homes. Of course the good times didn’t last and within a few years the drought hit, leaving the optimistic farmers with no choice but to abandon their ventures and head back south. Hence the large number of abandoned and ruined buildings.

So it was with interest that we stopped at quite a few locations for the opportunity to record the progressive impact of nature on those man-made structures. 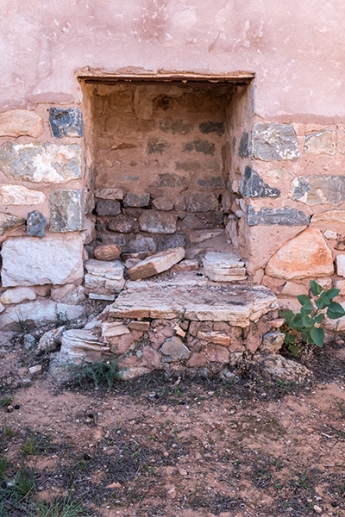